Hailing from Leeds, UK, dark singer-songwriter Duncan Evans was kind enough to expound on one of his favorite authors: Cormac McCarthy.  Read on to hear about how McCarthy’s books have inspired him… 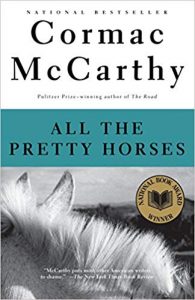 I first came across Cormac McCarthy’s work about a decade ago when my dad lent me a copy of All The Pretty Horses (1992). Before the end of the first paragraph I knew that this novel was unlike anything I had ever encountered before. Some people find McCarthy’s style – especially in this novel – excessively wordy and florid to the point of being unreadable. I disagree. To me, McCarthy’s prose-poetry flows like rye whiskey: acerbic, potent, and utterly intoxicating. Every elegantly crooked sentence adds a brushstroke to a sorrowful and compelling painting of a dying old-time American South that I will never witness first-hand but that – through McCarthy’s words – I now feel as if I know.

Along with The Border Trilogy (which includes All The Pretty Horses, and in which his writing is at its most free-flowing), some of my favorite Cormac McCarthy works are Suttree (an allegedly largely autobiographical work about a struggling fisherman in Knoxville, Tennessee who maintains his dignity amidst lowlife chaos), The Road (a story of solidarity and love between a father and his young son in a post-apocalyptic setting), and The Sunset Limited (a play consisting of one protracted conversation between two characters after one has saved the other from attempted suicide).

The themes and plots of McCarthy’s writing are often quite dark and macabre on the surface. However, McCarthy instills his characters with a universal and undyingly hopeful human spirit. He teaches us how we can navigate this twisted and contradictory world even in the most desperate of circumstances.

McCarthy also regularly breaks every established rule of writing, and yet it works every single time. If language is law then he is the outlaw, just like so many of the characters he portrays. This idea is of great worth and inspiration to me as a musician, songwriter and creative. In art no rule is sacred, and those who never step outside the guidelines are condemned to eternal mediocrity.

McCarthy is notoriously tight-lipped about his own biography and personal opinions. It is said that, in the 1960s, he lived in a “shack with no heat and running water in the foothills of the Smoky Mountains outside of Knoxville” [Lewis, Kimberly (2004)]. It is certain that he tenaciously dedicated himself to his artistry with little reward or recognition for much of his life. It wasn’t until 1992 that, aged 59, McCarthy came to wider fame when All The Pretty Horses won an award and became a bestseller. For me this is a reminder that, as artists, we do what we do for the love of it and that our art not reaching millions of people doesn’t invalidate it. If even Cormac McCarthy had to struggle for much of his career then perhaps we can accept that the rest of us might have to do the same. 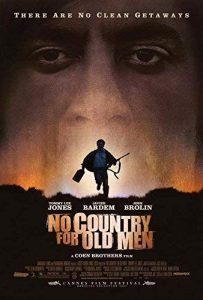 If you are more into films than reading, I would suggest the Cohen Brothers’ laconic and captivating adaptation of McCarthy’s No Country for Old Men (2007) as a starting point. Book-wise, The Road is probably the most immediate and accessible, but All The Pretty Horses, whilst more “difficult” initially, epitomizes McCarthy’s core style and is an essential bit of reading.

I hope other people are able to feel some of the same joy and inspiration that I draw from Cormac McCarthy’s work. When I read his words they so often work as a call to action which energizes me for whatever I am creating at the time. There is even one short line on a song from my last album, “Prayers for an Absentee,” which is borrowed from Cormac McCarthy. Answers on a postcard if you can find it. Above all, McCarthy inspires me to “get on with it”: not to rest on laurels and not to wait unnecessarily to do what needs to be done in the creative process.  To keep moving. I will end with a quote from The Road. It might seem to be hopeless on the surface but I believe it has an opposite meaning when considered more deeply.

Duncan Evans has been releasing music as a solo artist via Prophecy Productions since 2013.  Have a listen below!

Follow AltCtrl’s 2020 Spotify Playlist for music from all the bands we cover: