Hey, it’s Jerry Lovett here from Cult Of Sorrow joining you on this edition of Nerd Talk! 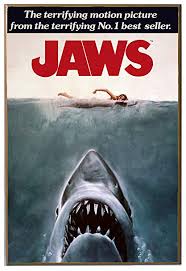 I was pretty young when Jaws came out. I ended up seeing it seven times at the movies and countless other times since. I own the anniversary edition on DVD and still watch it about once a year around the 4th of July. As a youngster, the movie was terrifying! It strikes a primal fear in us. While monster movies can be scary too, you know they aren’t real. They may give you a nightmare or two, but that’s about it. The things that happen in Jaws can actually happen to you in the ocean. Growing up my family would vacation once a year in Florida. The movie made me terrified of going in the water, it made me scared of lakes too and even the pool. Silly yes, but it instilled that kind of deep fear in me. It also gave me a lifelong fascination of sharks. As an adult I would become a certified diver. I’ve been in the water with sharks and never had a problem as long as you give them their space. They are amazing creatures and an important part of the ecosystem.

Magick in Theory and Practice 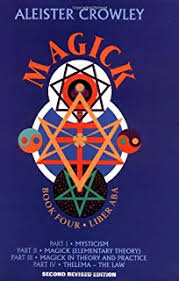 I bought this book when I was 16 years old; it was the first book I ever bought on the occult. I had become familiar with Crowley from the song “Mr. Crowley” by Ozzy and had heard Jimmy Page was into him. I had read a blurb about him being the foremost practitioner of Black Magick in the 20th century and the most wickedest man in the world. All of the bands I was listening to at the time had some sort of relationship with the occult it seemed. Being a rebellious sort at the time and going to a catholic high school, along with wanting to follow the lead of my musical heroes, the occult seemed like the perfect way for my rebellious spirit to stick it to the establishment. I would do the most heinous act I could, worship the devil!

Magick in Theory and Practice was written for the neophyte, or beginner, a sort of 101 in Crowley’s system of Magick. Once I eagerly got it home to read, I realized I didn’t understand a bit of it. Nothing! There were no spells to cast hoards of demons on my enemies, no spells to make all the hot girls in school want to fuck me, there were no spells or rituals at all except for the lesser and greater ritual of the pentagram and hexagram, and those were in the appendix. I had no idea what the use of them were. It would take some years of buying more books before I would start to understand that book. While it may be a 101, neophyte book, it assumes you went through K-12 before reading it.

My biggest shock from the book would be the day I realized it had nothing to do at all with the Satan. Crowley’s only comment on Satan was if he were real, he should be revered as any other god, but he didn’t believe in Satan. Gods, Goddesses, and demons were all part of our psyche, which could be activated through meditation and ritual. The goal of Magick is to go within and find your true higher self, make contact with and then live your life in accordance to your true will. A person who follows their true will has the inertia of the universe behind them. The changes you make on the inside will reflect on your world outside — that is Magick. Do what thou wilt shall be the whole of the law.

I have to admit I’m not much of a game player. I haven’t played a video game in 10+ years. When I was younger, we did go to the arcades to play pinball and whatnot. I would buy NES, SNES and a Sony Playstation as an adult, but mostly played sports games like Madden Football, so I suppose it would be my favorite since I did play it a lot years ago. I was never really into action games for whatever reason, but did enjoy a game called Clay Fighter on the SNES. I loved the graphics and clay characters you fought. That’s about it. Not too exciting of a chat on this subject I know, but I would rather play guitar, write or go inside myself. I try to spend as little time in front of a TV as possible.