I actually saw The Giraffes play here in Connecticut in the early 2000’s. They were on a package tour were with equally like minded bands that mixed punk and hard rock that played the Webster Theater. Nobody showed up. It wasn’t their fault, they were fantastic, but most decided to sit at home rather than check out something new and exciting. After they played, I went up to their merch booth and bought a t-shirt from lead singer Aaron Lazar. They never came back. Would you?

So, for a while I kind of lost track of the band. But, they kept at it, until a short break from 2011-2014, eventually returning to the rock n roll trenches. Lazar tapped out for a while but returned in time to release a new EP, Usury, in 2016. Now, three years later, we have a new full length Flower Of The Cosmos, which showcases the band at the height of their powers.

The Giraffes play punk-tinged hard rock, with touches of surf rock, and a little pop, added in for good measure. Lazar has a commanding voice, very similar to Mark Lanegan’s, while guitarist Damien Price conjures up wicked riffs and ripping solos. The rhythm section of Andrew Totolos and newish bassist Hannah Moorhead, bash away with equal parts, power and precision.

Opening track, “Can’t Do This In My Head” opens with a surf rock flourish and gets down to the business of rocking pretty damn quick. “Like Hate” has a rollicking groove, while “FAKS” adds more surf guitar, cranks up the punk and finds time for a ripping solo at its end. “Golden Door” mines a sweet fuzzed out riff and cowbell infused rhythm to great effect. “Fill Up Glass” is a bit more mellow and psychedelic, while “Dorito Dreams” swings the meter punky hard rock overdrive. “Crude Wave” adds more fuzzed out surf guitar licks and rocks out. Album closer “Romance” starts aggressively and adds some wistful psychedelic touches before ending with another paint peeling solo. 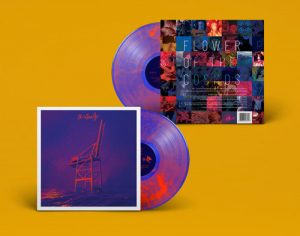 Flower Of The Cosmos is a killer return to form from this perennial Brooklyn “cult band”. Though, the “cult band” status is no fault of their own. They’re still putting out quality records and playing raucous live shows. Check out this record, and judge for yourself, you might find yourself discovering a new favorite band.

(One more thing, never judge a band on how people receive them in this state, because sometimes we can be a little too narrowly focused and fickle when it comes to bands we like — and thus miss out on cool stuff happening right in front of our eyes. That happened all those years ago, and it’s still happening today. Get out of your bubbles, punk and metal scenes.)