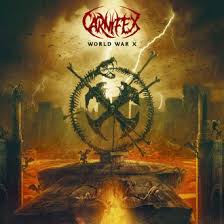 I’ll never forget the two metal elitists shouting “Hey Mitch Luker! Are you guys gonna do that BREE BREE song from that album about the cowboy’s job?” at Carnifex vocalist Scott Lewis during The Summer Slaughter Tour’s Philly date back in 2010. In his black tank top and covered in tattoos, Lewis shot them a wicked grin and brushed right by without a word.

Flash forward nearly a decade later at this year’s Summer Slaughter (which you can read about here!), thrashers, death metal purists, and core kids alike stood in line to take a selfie with him and the other members of the band, which includes guitarists Cory Arford and Jordan Lockrey, bassist Fred Calderon, and drummer Shawn Cameron.

Releasing their seventh album entitled World War X this month, the California based quintet have come a long way since the days of Dead In My Arms and The Diseased and the Poisoned. In place of two-step segments, World War X is chock full of circle pit worthy riffs, searing solos and lush keyboard textures. The result is an album that lives up to its name, taking influence from some of black metal’s finest while retaining a sound sure to become the Carnifex signature tone.

Triggering flashbacks of Dimmu Borgir’s In Sorte Diaboli album, the opening title track places us right in the heart of a battle for the ages. Melodic riffs weave their way around ethereal piano work and relentless blast beats. “Visions of the End” shows a more techy side sure to please fans of bands like Nile and Archspire. Lockrey’s fretboard skills take center stage here, as well as in tracks including “Eyes of the Executioner” and closing opus “By Shadows Thine Held.”

The first single from the album, “No Light Shall Save Us,” features Arch Enemy vocalist Alissa White-Gluz. Unquestionably skilled in guttural growls, Lewis’ in mid range roars are a perfect match for White-Gluz’s equally powerful voice. The track stands out in that both vocalists complement each other without one becoming lost in the mix.  White-Gluz further contributes her siren-esque clean singing, adding a haunting and exquisite texture.

Shredder extraordinaire Angel Vivaldi, one of two guest guitarists on the album, joins Carnifex for “All Roads Lead to Hell” with an unfortunately brief but nonetheless head spinning solo. Segueing into “Brushed by the Wings of Demons”, legendary producer Jason Suecof makes his third guest solo appearance on a Carnifex album. In addition to his lengthy resume as a mixer and producer, Suecof’s guitar work has been featured on albums by Trivium, The Black Dahlia Murder, and The Autumn Offering just to name a few.

Bottom line: though not the shortest Carnifex album in terms of running time, World War X seems to end somewhat abruptly and leave listeners craving for more. Still, the energy, tone and guest appearances are impressive and definitely worth a listen. While deathcore has evolved in the decade since its rise in popularity, it is great to see Carnifex take a black metal approach first explored by bands like The Breathing Process, who deserve major props for being way ahead of their time in 2007.

Visit your favorite record store to pick up World War X out now via Nuclear Blast, and be sure to catch Carnifex on their next tour. If their recorded material does not make you a believer, their live shows certainly will.