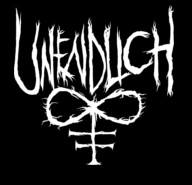 Baltimore black metal duo Unendlich got nerdy with Alternative Control this week as they prepare to release their third studio offering, Misanthropic Sedition, on December 14th.  The EP is a precursor to a full-length album scheduled for early 2019 that,  in the words of main composer and instrumentalist Mike Connors, “deals with the reliance on religion as a mechanism to satisfy the human ego’s desire to attribute meaning to one’s existence and pacify the feelings of discomfort in the unknown.”  He and drummer Anthony Rouse share similarly dark tastes in movies, books, and video games…

Mike: Jacob’s Ladder – I am a fan of psychological horror where the monster takes form from the viewers mind and isn’t directly shown. The story in Jacob’s Ladder is told in a very elusive manner where you never know if what you are seeing is reality or psychosis. It covers subjects of violence, loss of sanity, and death which resonates with me. I love the movie so much it inspired a track on my first album.

Anthony: Christopher Nolan’s The Dark Knight. This is a pretty boring pick I’m sure, since this movie is loved by many, but to me it’s almost flawless. Batman was THE superhero for me growing up, no other superhero except for Spider-Man came close. What Christopher Nolan did with his Batman trilogy was take its fundamental and abstract concepts and transform them into more of a character-driven drama, one that could be realized in the real world, with a healthy dose of action. The Dark Knight, to me, is the pinnacle of Nolan’s aspiration. Between the acting, cinematography, the explored themes of humanity and the line between decency and depravity that humanity dances around, its considered to be a cinematic achievement, and for good reason.

Mike: The Drowned and the Saved by Primo Levi – Extremely bleak and dark book in which Levi recounts the despairing conditions and horrors in Auschwitz. His own survival came at the cost of another’s death. The shame he was left with, having survived, may have led to his suicide later in life. The book inspired the song “Hell Waits For Me” on “Monarch of the Damned.”

Anthony: Hiroshima by John Hersey. This book kept me glued to its pages when I was an undergrad with a major in political science. It chronicles the stories of six people who survived the bombing of Hiroshima at the end of World War II, from right before the bombing to approximately 1984. The nuking of Hiroshima and Nagasaki was one of the most horrific yet significant moments in history, and this book does a fantastic job conveying the horrors and life-altering circumstances of a city getting nuked. You come to care about what becomes of these six survivors throughout the book. It’s one of the most profound works of journalism I’ve ever read, certainly a far cry from the journalistic standards we have now. It even pioneered a form of journalism called New Journalism: combining story-telling techniques found in fiction with nonfiction reporting.

Mike: Sacrifice developed by Shiny. Still one of my favorite RTS games where you play a wizard emperor with gods demanding your service in order to rule the world. With his days of rule numbered, the emperor summons Marduk for help. Marduk destroys his world and the emperor hops to another realm where the player, as the emperor, chooses which of the six gods to do tasks for before Marduk follows him. I find it slick how they weave Babylonian gods into the story. Multiplayer was killer too, though it’s probably too old for anyone to play.

Anthony: Halo: Combat Evolved by Bungie. This was a hard choice for me, because my favorite video game series of all time are Resident Evil, Halo, Mortal Kombat, Silent Hill, and Devil May Cry. Ultimately, it came down to this game because it was an incredible immersive experience for me as a kid. I loved the setting, the plot, the pacing, the tone, and the balance of action and mystery. You had the (mostly) silent armored protagonist, Master Chief, and his charming A.I. assistant, Cortana, fighting off armies of an alien race called the Covenant and, later on, a grotesque parasitic species called The Flood, while uncovering the mystery behind these ancient, futuristic, ring-like structures and the purpose behind them. When this game came out, there was nothing like it, at least in the sense of combining an arena shooter akin to Doom with all of the game’s storytelling elements and its interesting setting. It’s really a terrific game which still holds up today, barring the graphics.

For more from Unendlich, find them on the interwebs — and check out the title track from Misanthropic Sedition below.