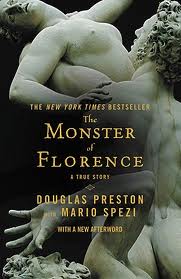 Many people have a fascination with serial killers. There are countless television programs featuring profiles of serial killers. They are dissected in documentaries, mimicked and immortalized on film and in books, and haunt our imaginations. Perhaps the most fascinating and frightening serial killers are the ones who have never been caught and have been speculated about for decades. England has Jack the Ripper. America has the Boston Strangler and the Zodiac Killer. And Italy has Il Monstro de Florence. What makes these killers stand out among other serial killers? The shocking nature of their crimes and their cool names. Perhaps it’s the simple fact that they aren’t monsters at all, but human beings, and could be anybody you pass on the street.

The Monster of Florence is not your typical book about a serial killer. This is a book about the disturbingly corrupt, chaotic, irresponsible, and totally inept Italian justice system that, in its attempt to capture a serial killer, destroys the lives of innocent people under the pretense of seeking justice. Two of these people are the authors of the book: Mario Spezi, an Italian journalist and Douglas Preston, an American novelist.

The first half of the book chronicles the Monster of Florence case from its beginnings and Spezi’s coverage of the events. The story begins in 1981 when the bodies of Giovanni Foggi and Carmela Di Nuccio are discovered in the Bartoline Fields of Florence. In Florence, it is common for young adults to live at home until they are married, so many couples park in the remote hills of Florence to get physically acquainted in their cars –like America’s drive-in movie theatres of the ’50s & ’60s. Il Monstro de Florence seized this opportunity to prey on canoodling couples often shooting the male first, and, then, dragging the female out of the car, shooting her, and cutting out her vagina with what was likely a scuba knife. The contents of the woman’s purse, along with her vagina, were taken by the killer, leaving behind gruesome, disturbing crime scenes.

Immediately, the flaws in police procedure are captured in the book. Spezi gives accounts of police, journalists, and spectators walking haphazardly through unsecured crime scenes. Suffice it to say, the collecting of evidence was also inefficient as well as finding and questioning witnesses. Following the investigation and the make-up of the Italian justice system was dizzying, but Preston and Spezi do a good job explaining it, managing to clarify its many branches and positions by comparing them to American positions (even though some are vastly different) without insulting the reader’s intelligence.

Ignoring the American FBI profile, the police and military (which work both separately and together in these cases – figure that one out!) follow their own paths. One has to read the book to believe the avenues the police go down: satanic cults, drunk prostitutes and mentally ill witnesses, secret societies for the elite and sexually depraved… Conspiracy theories abound! Random “questionable” deaths are flimsily connected to the Monster killings, and, unfortunately, many people are accused of being connected with the crimes, spending time in prison, ruining their lives and reputations. Quite possibly the most intriguing, yet alarming, thing is that this case is ongoing and the secret satanic sex society theories are at the forefront.

Spezi’s reputation and experience as a journalist for one of Italy’s largest newspapers, La Nazione, opens doors for him that are not available to others in his profession. He has connections in both high and low places, which give him access to police documents, photos, evidence, and crime scenes. All of his inside scoops are recounted in the book, with thorough, detailed coverage of events, with specific names, dates and places. It is the type of coverage one would expect from a reputable journalist. Preston’s voice adds a novelist’s touch, making Spezi feel almost like a character in a novel rather than a “journalist,” which, to me, makes him human and sympathetic. The story of his life as the “Monstrologer” (so dubbed due to his consistent coverage of the case), had it been told just by Spezi may have seemed more distant and cold, whereas Preston is able to capture Spezi’s emotion and integrity. He’s not into sensationalism. He’s “old-school.” His country, people, and the truth are of the upmost importance. Finding the killer is not a game or career advancement, it is simply a necessity.

In the second half of The Monster of Florence, Preston enters the story and becomes a part of the Monster of Florence case. Having moved to Florence to work on a thriller in 2001, Preston meets Spezi and learns of the Monster case. They decide to investigate the case on their own and try to discover the identity of the killer. By exposing flaws in the investigation, Spezi makes some powerful enemies, which, of course, leads to his imprisonment. Preston’s association with Spezi leads to his own entanglement in the case. Shockingly, Spezi and others are detained and questioned without knowing of what they are being accused. The accounts of the hearings and interrogations are fascinating and need to be read to be believed. Sometimes I felt like I was reading The Crucible. Surely, these things couldn’t happen in a developed country in the modern age!

In the end, it was difficult not to be outraged at the ineptitude of the Italian legal system. At times, I found myself almost nauseated by the pursuits and abuses of power and cover-ups to “save face.” I find it terrifying and incomprehensible that the prosecutor, Giuliano Mignini, who was recently sentenced to jail time for “abuse of office” during the Monster investigations, now holds Amanda Knox’s future in his hands. At the heart of all these crimes are the seemingly forgotten dead whose real killers roam free because sensationalism and career advancement are more important than life and death. Sadly, this is true in America and other nations dominated by sensationalistic media.

After reading this book, I will think twice before ever traveling to Italy.