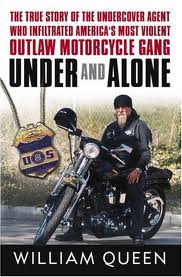 If you’re addicted to Gangland reruns, Under and Alone (2005) is the book for you.  ATF agent William Queen tells the story of going undercover in the vicious Mongol biker gang, rising through the ranks to become a fully patched member and eventually the Mongols’ treasurer.  The information he risked his life to gather became instrumental in a federal case that put eighteen Mongols in prison.

Masquerading as the long-haired biker Billy St. John, Queen infiltrates the gang with the help of a confidential informant.  “I suppose in my own wishful mind I’d envisioned the CI to be cute little biker chick who’d been turned around by an attack of conscience,” Queen wrote.  “But what rolled out of the truck was two-hundred pounds of bleached-blond tweaker that could neither stand still nor shut up.”

This less-than-auspicious beginning was representative of many of Queen’s experiences with the gang.  He wasn’t immune to America’s fascination with outlaw bikers, despite witnessing many unglamorous aspects of the lifestyle – like plots to gang-rape strippers and “ol’ ladies” spending their kids’ birthdays doing meth.  And when it came down to it, I think that Queen rose through the Mongol’s hierarchy so easily because he was the only one in chapter who wasn’t a drug addict.  Maybe if everybody wasn’t so busy snorting crank, they would have wondered why some guy named Billy St. John came out of nowhere wanting to hang out with them…

But Queen/St. John does develop real friendships with some Mongols – a fact that weighs on his conscience as he collects evidence against them.  “I kept telling myself that I was on the right side here, that I was doing what needed to be done,” he writes.  But by the end of the book, I wasn’t convinced that Queen had convinced himself.

Under and Alone was a quick read, and intriguing in spite of some of the really gross things the bikers did.  It was also interesting to read about how Queen talked the other Mongols out of some of their more nefarious plans — “Hey, you don’t need to kill that mechanic, let’s just sell this piano your wife stole out of a storage unit.  Sound good?  All right, lemme buy ya a beer!”  The undercover mission was ultimately successful, as you might guess since Queen lived to tell the story, but it changed him more than he intended.  From the safety of my living room, I ate up the crime show drama of Queen’s wild ride.  He’s one badass dude, and Under and Alone was a pretty badass book.