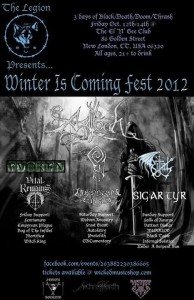 I’ll admit it: when it comes to black metal, I don’t know my ass from my arm gauntlet.  I listened to an Agalloch song one time, and spent a Vital Remains show in the parking lot having a heated discussion with some dude.  (Is Vital Remains even a black metal band?  Or do they just wear spikes?)  But when I saw that a giant festival with an awesome name was happening in our state — and Mortifica, a band we just featured in our music section, was playing it, along with Stamford’s own Infernal Solstice — I knew that Alternative Control had to get the scoop.  And Benjamin Hapgood, a.k.a Morg, of booking company The Legion was happy to talk to us about Winter is Coming Fest 2012, at the El n Gee in New London from 10/12-10/14.  Enjoy the whole story below!

Alternative Control: How did you get all these bands — some from overseas! — to come to Connecticut?

Benjamin Hapgood: Basically, it wasn’t too hard for us. We knew what we wanted to do and what bands we were looking for to make this festival a success. We know this type of festival has been long coming to the area and the bands seem to feel the same. We had bands jumping to get on WICF2012. Many are locals, yes, but we are about giving the bands that we think have the potential to get somewhere the opportunity to do so.

As far as international acts go, it was really the same response. The only difference was negotiating the price to book. Fen (UK) are excited about playing and it will be their first time ever in the states. Daemonskald, (the only member) of Sig:Ar:Tyr (CAN) was so excited for the opportunity that he is putting together a line-up specifically for the festival making this the band’s first show ever. Ritual has been split up for some time and only just recently put the band back together and when we talked to Ian Fleming about it he was ecstatic and couldn’t think of a better way to show that they are back to stay.

Tony Lazarro of Vital Remains actually came to us about playing. We couldn’t believe it when we received the message from him! Agalloch took a bit more coercing, but we all agree that it was because this is our first festival.  When we initially e-mailed their manager Nathan we had almost no bands confirmed. When we contacted them again we had the line-up almost complete and offered them the Festival Headliner slot. They liked our offer and here we are.  All of the bands agree that a festival of this nature needs to make its presence known in New England, especially given New England’s history of witches, hauntings, and secret organizations.

AltCtrl: Who or what is The Legion, and what is your role in it?

BH: The Legion is an organization of like-minded individuals whom are actively trying to bring good metal to the forefront of the music scene. In lay-man’s terms, we are a booking company and soon to be record label.  I, along with Lord Viall and Heretic, am a head of The Legion. The three of us run its inner workings and are the driving force behind this festival. It was originally Lord’s idea and when he presented it to Heretic and I, we all agreed that this needs to happen and now is the time to do it. New England’s, (and especially Connecticut’s) music scene has been stagnant with the same shit for years and it’s been pissing us off. A lot of people seem to feel this way but lack the motivation to achieve it. We are unafraid of failure for we know this is what our scene needs. A change is happening and we are riding the storm clouds into the battle. Winter Is Coming and there’s nothing anybody can do to stop it.

AltCtrl: I see that 3-day passes are available online for $85.  How much are one-day tickets, and can you buy them in advance?

AltCtrl:  What time will the show start each day?

AltCtrl: What bands are you most looking forward to seeing?

BH: I can’t wait to see them all. Every band that we have chosen has excellent talent and are all great musicians. If I had to choose… I am looking forward to seeing Obsidian Tongue, Wolven Ancestry, Ritual, Sig:Ar:Tyr, Black Table and Fen the most. I am also looking forward to playing with them being that my band Murrum will be playing on Sunday the 14th.

Thanks for your time Jessie, and remember… Winter Is Coming!

For more info, visit the Facebook event or see the daily lineup below: