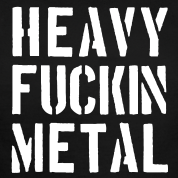 The people I most identify with are METALHEADS.  I feel a brotherly love and connection to them, as biased as it may be.  Nothing compares to being at a show and releasing emotion by headbanging, finger wagging and playing intricate air guitar solos.  In what other context is it okay for a sweaty, fat dude who smells like an onion to rub against me?  The tribal atmosphere experienced at a metal show is intense.  The most gratifying experiences in life are when you feel…. united with others!

Metal has its own culture which includes a way of looking, speaking, and thinking.  Metal style is rooted in biker clothing and mixes goth and military elements.  Most essential to metal are black clothes and band shirts.  Period.  My husband and I adopted a black cat to preserve our elaborate black wardrobe.  Also, beards are to metal as Vicodin is to House.  Vikings, goats, Amon Amarth and sphinxes are all bearded and metal.  Tattoos, hoodies, long hair, band shirts (and it best be a shirt of a band you like) combat boots, trench coats, camouflage, cargo pants, leather wrist cuffs, and silver jewelry are all representative of metal.  Symbols commonly found are the iron cross, inverted crucifix, pentagram, skulls, chains, crosses, and Thor’s hammer.  Actual metal chicks are rare but they do exist.  They’re not the ones dressed to impress the guys or mindlessly tagging along with their boyfriend at a show; they know the damn music and share its passion!

In the 1980s, old school thrash metalheads wore high top sneakers, mad tight pants, band shirts, denim vests with a “Number of the Beast” patch, pins, MC jackets, and bullet belts.  The common theme throughout the history of metal fashion is affordability, low maintenance, and comfort.  What’s more metal than that is individualism and wearing whatever the fuck you want.  A lot of hardcore metalheads don’t look metal at all; being metal transcends appearance and is something that’s in your soul. 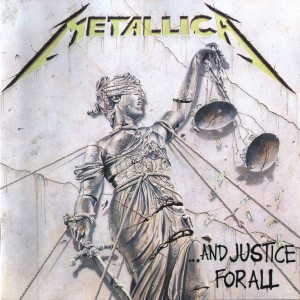 I first heard Metallica’s …And Justice for All when I was thirteen years old and instantly knew I found a place where I belong.  It expressed the anger and ever-looming depression I felt but could not articulate.  I admired the older metalheads in school with their greasy hair, mc jackets, and Anthrax shirts.  Being a metalhead in the Bronx was a serious challenge though.  Guido classmates thought I was a devil worshipper or that I liked the following song: “Kill your mother, kill your father, fuck your brother, screw your sister.”  Where did this even come from?

People don’t casually listen to metal or go through a metal phase; it is a lifelong enthusiasm.  Metal satisfies on so many emotional levels.  It connects me to my deepest emotional pain.   It helps me not murder someone.  It allows me to perform the Irish Jig at Pagan metal shows.  Politics, history, the occult, mythology, war, genocide, addiction, death, depression are just some of the content that demonstrates the depth and diversity of metal’s lyrics.  With classical roots, complex riffs and melodic harmonies, metal musicianship is both beautiful and brutal.  And yet it has the reputation of being mindless music because it’s fast, aggressive and loud.

I’ve met cool people in random places simply because we recognized each other’s metalness.  An instant bond leads to conversation about bands and what shows we’ve been to in the same way that people talk sports.  At metal shows our primal instincts are expressed in a safe environment.  We embrace the dark side of human nature and the harsh realities of life unlike other music genres.  We’d swallow the red pill before we passively accept the ignorant bliss the mainstream media tries to feed us.

Metal, like all groups in society, has ass-clowns.  From judgmental dudes who think a band sucks because more than 4 people like them, to the guy who identifies himself as a metalhead and then starts talking about Kiss, to the metal elitist who listens to bands you’ve “probably never heard of”.  Furthermore, I lay awake at night with the certainty that throwing the horns has been adopted by popular culture.  An evolution is in order and I recommend we start with invisible oranges.  Alas, throwing the horns are no more.  Another hijacked image is skulls; they are suddenly considered “cute”.  I prefer my skulls on outlaws; not children’s pajamas and bibs!