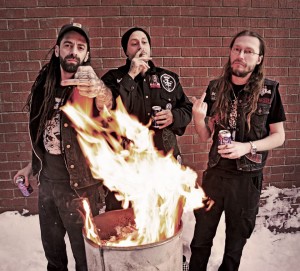 When Dopethrone’s PR folks asked Alternative Control to review the band’s upcoming album Hochelaga following our writeup of their single “Scum Fuck Blues,” I was happy to oblige.  Hochelaga serves up all the snarling sludge promised by that track, and then some.

Dopethrone maintains a steady pound throughout the seven-song album; drums and guitar riffs work in tandem, as I suppose is a marker of the subgenre.  I like this band’s style because they deliver the doom/sludge/whatever in manageable chunks — five or six minute songs, as opposed to eighteen-minute epics.  Vincent’s menacing vocals are completely interwoven with the guitar — they’re, like, part of the riff, bro.

The band’s use of samples enhances Hochelaga’s subversive atmosphere, telling a story of depravity and drug abuse. My favorite is the one that opens the second track, “Chameleon Witch”:  “They dress like us, pretend they belong to mankind, profess to keep our laws and code of morals…  But in their presence, we’re always aware that they’re phantoms, and that their ideas and actions are out of key with the general pitch and tone of normal life.”  This sounds pretty emo, but those lines resonated with me as someone who does a great job pretending to fit in.  I get in my car and go to work, pay my bills, play the game… But at a point in time when I should be getting pregnant and hosting Tupperware parties, I’m sewing patches on my jacket and listening to doom metal — a phantom grown-up, blasting Dopethrone in my Corolla.

And that’s exactly what you should do too, in your own car.  Hochelaga comes out on April 13th via Totem Cat Records.  While you’re waiting, check out some of their other stuff on bandcamp and let Alternative Control know what you think!