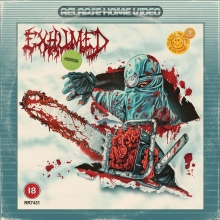 Many bands go through stylistic changes during their career.  Some are radical changes, such as Celtic Frost [Morbid Tales vs. Cold Lake] or Corrosion of Conformity [early crossover thrash to later Southern rock-tinged boogie].  Many are slight adjustments, adding aspects of another genre or sound to give the material a new edge.  Veteran death grinders Exhumed are a band that falls into the latter, but in a full-circle, come-to-Lemmy route.

Exhumed’s forthcoming release, Horror, contains both trump cards synonymous with the band’s previous work: razor-fast, precise riffing coupled with a dual-vocalist approach.  Guitars twist and turn around Mike Hamilton’s pummeling drum performance.  Ross Sewage and Matt Harvey take turns carpet bombing listeners with guttural howls and screams in line with the aggressive songwriting.  The change comes in the form of song arrangements.  Whereas the band’s last release, the sprawling concept album Death Revenge, contained longer songs and busier arrangements Horror harkens back to Exhumed’s early days.  The entire record checks in at twenty six minutes with only three tracks eclipsing two minutes in length.  This is a straight up banger with very little time for pomp and circumstance.  This is a curb stomp, not a street fight.  Recorded at the band’s own studio, Darker Corners, the effort was mixed and mastered by Joel Grind [Toxic Holocaust] and provides the listener with a brutal sonic attack.

The album kicks off with “Unsound” which sets the tone for the rest of the material.  Brutal and unrelenting “Unsound” morphs into “Ravenous Cadavers” and we are off and bludgeoning.  The band race through song after song without ever taking a foot off the gas.  Whereas the previous two albums had melodic parts reminiscent of Heartwork-era Carcass, Horror is all octane, all the time.  “The Red Death,” “Clawing,” and “Rabid” are personal favorites but nary a week track to be found.

The band has already released a video for the track “Naked, Screaming, and Covered in Blood” which encapsulates the vibe of the entire album – old-school VHS simulation with campy horror befitting of the track [note: video contains naked breasts – possibly NSFW depending on who signs your checks].  Horror drops on Friday, October 4th in all standard formats.  Get your pre-order from Relapse.com!