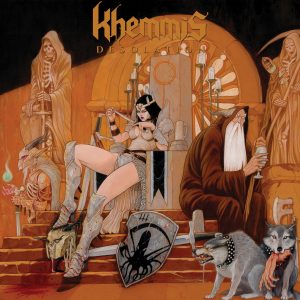 What can I saw about the new Khemmis record?  Their 2015 debut Absolution set them on a path to becoming darlings of the indie metal press; Hunted, released a scant year and a half later, was named Best Album of the Year by Decibel and solidified their place in the hearts of doom metal listeners worldwide.

And keeping with their frenzied songwriting pace, Khemmis is poised to release Desolation on June 22nd 2018 via 20 Buck Spin and Nuclear Blast.  The warrior maiden who was at the wizard’s feet in Absolution has taken the throne — and she doesn’t look too happy about it.  The wizard sits on the steps now, wine glass in hand, and he doesn’t look like a happy camper either.

…But listeners might have guessed that Desolation would be an emotional album.  The first couple songs feature Clean Vocals Guy, with heartbreaking lyrics like “How could I pray for salvation / When I’m the only mortal left to breathe?”  Good question, bro, good question…  Musically, Desolation offers the melodic and rhythmic twists Khemmis fans have come to love, at times incorporating hints of Gothenburg and NWOBHM to create a sound that is distinct from previous releases.  Furthermore, Khemmis is a band that knows exactly where and when to do a big landing on a major chord; each song has points that build to epic proportions.

One thing listeners will notice (and this isn’t exactly a scientific comparison) is that there is a lot less of Growling Vox Guy — on vocals anyways, he’s certainly playing his guitar plenty.  In terms of singing, he really escapes from the dungeon midway through the third track “Seer” with the menace cranked up to 11.  By the time we get to “Maw of Time,” Dude sounds like a snarling saber-toothed tiger guarding the castle gates.  Goddamn, turn the horses right around, I don’t think we’re getting in here… 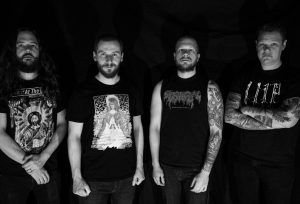 I can confidently say that Desolation gets ten out of five hi-fives and you should pre-order it now.  There are probably many more lyrical/thematic layers to the album that I have not yet peeled back; however, if you wanted some “I’m hipper than you” elitist album analysis, you ain’t gonna find it on this blog.  I threw Desolation in the Corolla of Doom, put the gas pedal to the floor, and the above is what I think after four listens.  Who knows, in another few drives around Connecticut, it could become my favorite Khemmis release of all.

Review copy courtesy of Earsplit PR.  All opinions are my own (obviously).