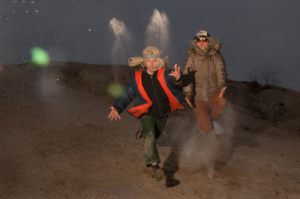 Fantasy Empire, the sixth official release by Providence-based power duo Lightning Bolt, is by far their most dynamic yet. The clarity of the recordings is much improved from previous ones — as Doug Mosurock of NPR put it, “(i)t’s less a blur and more a detailed map of planned aggression.”

The fuzzed-out riffs and spastic drum beats enchant from the first notes of opening track “The Metal East.” A throwback to earlier releases, this is a fitting introduction to Fantasy Empire’s intense thrill ride of the senses. “The Metal East” flows directly into “Over the River and Through the Woods,” bringing back the familiar bounce beat that anyone who has seen this band play live will understand. “Over the River…” takes me to places I didn’t think a Lightning Bolt track could. The progression in recording style is evident as each song streams easily into the next.

The third track, “Horsepower,” is a favorite that I’ve heard live in the past. The use of loops is evident and really adds to the overall experience. Fourth track “King of My World” opens up with the one, two, three beats. As Chippendale’s haunting wails mingle with the drums, the sounds of utter insanity grip you — and then Gibson lets loose the melodic dogs of war. At about 1:25, you’d swear Lightning Bolt just morphed into another being, but then they reel it back in.

In “Mythmaker,” the fifth track, a low roar of bass kicks in as vocals chant in the background. The song rises to such a crescendo that one would think a five-piece band of music masters was creating this racket — but no, it’s just two masters throwing the best at ya. At about 2:10, this song lets you know this is not the Lightning Bolt from 2006 or 2008.

Track six, “Runaway Train,” takes no time to rip your face off and swap it with the person next to you. The loops grind and twirl, swirled in with the lows of the lowest bass that Gibson’s unique instrument puts forth.

Track seven, “Leave the Lantern Lit,” immediately reminded me of Florida = Death. This brief, atmospheric song is the break in the album where you can regain your composure and then brace for the eighth track, “Dream Genie.”  This is the one that blew half my speakers when I gave this album its first listen last week. With the range of highs to lows from Gibson’s machine and riffs going up and down rapidly, this song feels like a giant bounce house.

The ninth and final track, “Snow White (& The 7 Dwarves Fans)” blows away already-blown speakers. Shortly into this song, the drumming insanity breaks down into a tribal beat unheard in eons, and then right back into the fast, pounding-the-flesh-away riffs. As I hear “Snow White…,” howls and broken chants summon forth the most illustrious visions….

Fantasy Empire is the culmination of over a decade as a power duo; Lightning Bolt has influenced a generation of noise-makers and music-takers, with immeasurable amounts of energy spent and received.  I personally recommend listening to the entire album, paying no attention to song titles. This is 48 minutes worth sitting through on a drive, at home, or live. Close your eyes and take this ride.

The album will be released on 3/24/15 via Thrill Jockey Records.  Pre-orders are available @ http://www.thrilljockey.com/thrill/Lightning-Bolt/Fantasy-Empire.

For more from Jeffrey, visit Against All Odds Productions.