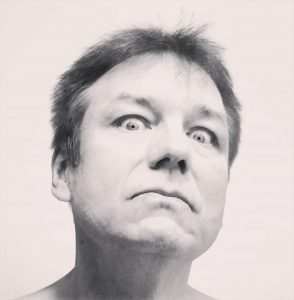 FIELDS AMAZE and other sTRANGE music exceeded my expectations of an album with “creative” capitalization in its title.  Patrick Grant’s work was originally released in 1998, featuring “percussion, gamelan, microtonal instruments, and electric chamber ensembles with narrative structures informed by chaos theory, biological forms, and B-horror films.”  (Goddamn, that’s a mouthful…)  Now for the album’s twentieth anniversary, Grant has remixed and remastered it, plus added bonus material.

Why re-release the album two decades later?  In a recent interview, Grant told the website Cinapse,

There were a number of reasons. One was very practical. The original base tracks were recorded on three DA-88 videotapes synced together to make 24 tracks. This was 1997 technology. I needed to transfer these tapes before either they a. fell apart or b. there were no more machines available to play them.

Another reason was artistic. After the creation of Tilted Axes as both an event and a recording, my profile was raised in a lot of circles and many people knew me for only that. I thought that by putting out these older music, it might give people a more complete picture of what I’ve done and what I can do. These are not simple remasters. Many stems were re-recorded and some tracks have only skeletal remains of the originals. In this way, they’re new and old. After all, isn’t that the very definition of what makes something classic?

A third reason was poetic and ceremonial. 20 years ago I formed my first company Strange Music Inc. It was spelled “sTRANGEmUSIC” because I accidentally hit the caps lock out of sequence and this kind of typestyle became a thing for a while. Also, “strange” is used to denote the fractal structures that were being espoused in Chaos Theory at that time. These influenced much of my writing at the time and to this day. These structures lend themselves so easily to music because they are music.

I’ll honestly say that I’m not the best person to review this music — especially while recovering from an epic migraine as a new chimney is being installed on the roof above my writing chair.  The sound of a gamelan makes me want to throw my computer across the room and my patience for music listening is rooted in 4/4 rock n roll.  Still, the smart composition of FIELDS AMAZE shines through the limitations of my personal preferences.  Layers of percussion intertwine with piano, strings, and woodwinds to create an Alice-in-Wonderland-esque journey down a rabbit hole of artrock experimentation.  The ol’ rock n roll does make a brief appearance in closing track “If One Should Happen to Fall,” featuring the ethereal vocals of Lisa Karrer.

Although FIELDS AMAZE was hard for me to listen to, remember that personal preferences don’t measure the quality of music.  Grant is a sonic artist, painting jagged stabs and flowing curves with a multitude of brushes.  Anyone reading this who’s into noise, horror movie scores, or the avant garde needs to find this album.  And speaking of artists, Grant has collaborated with the likes of Billy Joel, Quincy Jones, and Kehinde Wiley — y’know, the guy who painted Mr. and Mrs. Obama’s presidential portraits??  Kind of a big deal…

When Grant isn’t busy working with the luminaries of our time, he’s composing scores for documentaries and theater performances and running Strange Music Inc., “an organization dedicated to releasing recordings and presenting compelling new work with performances and installations in New York and around the world.”  So not only is he taking his own weird art to the highest level, he’s helping others do the same.  This Bud’s for you, Patrick Grant.  Now where’s my freaking Excedrin??