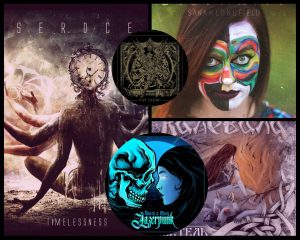 Every year, we as consumers discover a bevy of new music. Some more often than others but certainly not all of the new tunes are from the current year; we discover artists and albums from previous years and always ask the same question: “Why haven’t I heard of this band sooner?” I’d like to highlight some of the more notable new discoveries that caught my ear that I sadly hadn’t heard until this year:

I’ve always been a big fan of electronic music. From synthpop to aggrotech I’ve always managed to find one or two artists that clicked with me. I traveled to New York in September to see Aesthetic Perfection with my girlfriend and her brother without having done any research into the opening acts — so imagine my surprise when the opener writes some of the most energetic and fun synthwave I’ve heard in a long time. With this record, Lazerpunk takes the dark synthwave sound melds it with a hard edge, creating a blood pumping soundtrack to a seedy nightclub in a cyberpunk future.

Imagine if Cynic stuck to their death metal roots and continued their progression with their most recent sound. Serdce apparently visited that alternate universe and brought that sound to us. Classic old school death metal riffs offset by beautiful composition and orchestrations will make any prog fan weep.

Sometimes metal takes itself too seriously, which is one of the reasons I love folk metal. Kalevala doesn’t necessarily break the mold but rather take the Korpiklaani route to create a fun soundtrack to a drinking party in the woods. With songs like “Baykery (Bikers)” singing about motorcyclists just for the hell of it and “Zeleniy Zmey (Green Snake)” purely about drinking, they cast aside the grim scowling and simply have a blast.

I was familiar with Imperial Triumphant before but for whatever reason I never listened to their most recent work until this year. What a mistake that was, for Vile Luxury is one of the most unique and forward-thinking black metal albums I had ever heard. The band does everything it can to make every single note and chord as dissonant as possible. When a song isn’t bombarding you with aural chaos, it creeps; stalking the listener before it pounces again to berate them with noise, and I love every second of it.

YouTube quickly became a breeding ground for incredibly talented musicians since its inception. Street pianists, virtuoso children, meme makers, all of them are found online and make the average musician weep. It is here where I found Sarah Longfield, who uses the guitar and her mastery of two-hand tapping to create a wonderful poppy, prog album. There are sprinkles of metal influence here and there but her tasteful shredding along with stunning vocal harmony and synth programming really makes it hard to stop from hitting that play button one more time.

What music do you wish you’d discovered sooner?  Leave a comment!