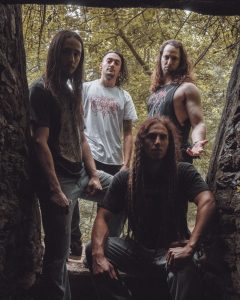 I was pleased with what I heard from the forthcoming sophomore effort from Philadelphia death metal band Basilysk. I’m often left cold regarding a lot of recent death metal releases. There’s usually a lot of recall and a prideful tradition that lacks innovation. The only time I’m put in my place is if the band takes an entirely different course, or if the band is able to perpetuate a great deal of energy and confidence. Basilysk is one of those bands and Emergence is a bold statement.

Before writing a review, I usually take some notes while I’m doing my first listen. Part of this process is jotting down a few artists or other possible influences that come to mind. I was pleasantly surprised that a couple names on the list differed from artists that Basilysk call inspirations. The band shouldn’t pigeonhole themselves into the death metal genre. They name drop death metal heavyweights like Morbid Angel and Death as points of reference – and those comparisons aren’t untrue. A song like “Molester of Dreams” has that classic Morbid Angel groove-and-squeal. The single “Sinners of Their Own Reality” does soar and twist like a Symbolic-era Death epic. But I was struck with just how much thrash was embedded in their sound. The Crown is one band that kept coming to mind, as well as Vektor, old school The Haunted records and maybe a bit of Gathering-era Testament. All these aspects are shelled in the bile of a death metal covering, but the galloping attack of tracks like “Sad State of the Arts” and “Fire (In The Temples of Sacrifice)” can’t be denied.

The band has chops, but they’re careful with note placement and harnessing each alternating movement of their compositions in a unified theme. The first half of the almost sixteen minute riff fest that is “Prebirth-Karma-Afterlife” takes some unexpected detours, but each facet of the epic serves the riffs that come before, leading a listener on a hellish quest through a multi-layered H.H Holmes indoor death maze. We don’t know where we’re heading, but the dire circumstances are clear. For the song’s second half, the listener passes down a well, landing on the barge Atet of Ra as it traverses the underworld. The band puts me right there in that demonic realm, coloring in the underworld fire lakes with bluesy riffs and mid-paced tribal rhythms. It’s an inventive and ambitious song, a perfect way for the album to end.

I guess if I have a criticism, it’s that the band isn’t doing anything strikingly new. Regardless, they’re still a group to check out if, like me, you enjoy an energetic and passionate performance of progressive flavored death and thrash. There’s definite stand-out moments that give Emergence replay value. They’re a strong ensemble, and just experimental enough to prove they have courage to go even more against the grain. I hope they continue to expand.

Emergence will be self-released on February 22nd, 2019.  Pre-order here.