Happy New Year, readers!  2018 saw the success of a guest column series called Nerd Talk, drawing bands from all over the globe to discuss their favorite books, movies, and video games.  While Nerd Talk will continue, we will also try out a new guest column series: Show Me Your Patches, where we invite bands to talk about their beloved battle vests, jackets, fanny packs, and anything else they’ve covered with flair.

Alternative Control is no stranger to battle vests: Matt Mullarkey (of The Lost Riots and The Ratz) wrote a column called The Art of Constructing a Punk Rock Vest in 2013, which proves almost six years later to be one of our most popular Google hits.  And Christopher Baldwin satirized battle vests in his 2012 article Mortified Nuclear Immolated Mutant Populace Death: A Fashion Article (much to the chagrin of some of our NYDM acquaintances), which ended up going viral in 2015 when someone lifted his hilarious “example” photo: 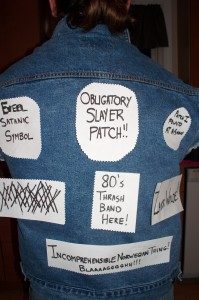 Now that’s what I call a rad battle vest!

Baldwin wrote in that article, tongue in cheek, “You can talk all you want about what’s metal and what’s not, but it’s easier just to let the vests do the talking for you, and to avoid conversation at all costs. Patches are important to give your vest its distinct identity.  But you can’t just throw any kind of patches on your back and expect to be respected — your distinct identity has to match exactly with all your true metal brothers if you hope to be included in the scene.”

Of course some of that is a joke.  But in all seriousness, patches can be pretty meaningful in The Scene.  Whether their vests are meticulously planned and unveiled only once complete, or works in progress that grow like a stamp collection with visits to different locales, metal enthusiasts choose patches to display where they’ve been and what they’re into.  Thus, battle “wear” serves as a great conversation starter!

For the purpose of getting this series rolling, I’m going to talk about three patches on my #1 Battle Jacket: the first patch I sewed on, the patch I traveled the farthest to acquire, and of course my favorite patch.  Here is an overview of the Forever 21 plaid coat that has become something of a personal trademark: 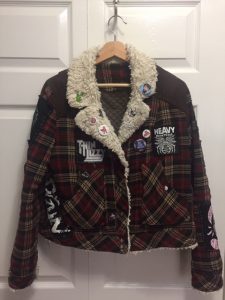 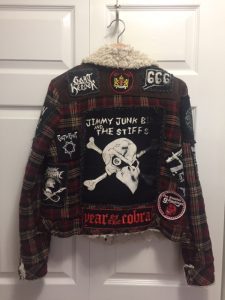 The first patch to go on was the Jimmy Junk Bird and the Stiffs back patch — that was one of my old bands and I thought it would be cool to have matching back patches like The Lost Riots did.  (Matt Mullarkey, I was completely copying you.)  Made up by Low Brow Printshop in Bethel, CT, this patch is a reminder that even if I’m “making owls” or “shouting back,” I’ll always be a Junk Bird at heart.

The farthest-flung patch is the Amsterdam one in between the shoulders; spoiler alert, it’s from Amsterdam.  I was lucky enough to visit the city in 2014 — only time I’ve been overseas — and it was just really neat.  If you ever have the chance, go there.  The pin on the lower left is from De Poezenboot, a houseboat cat shelter in Amsterdam where the cats freely come in and out — an attraction not to be missed! 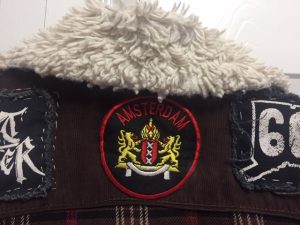 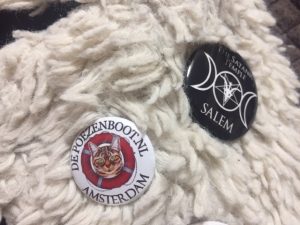 And finally, my favorite patch: on the lower right arm, Feminism Is Not a Dirty Word.  I think it’s the word itself that makes people uncomfortable, not the simple idea that all genders should have equal rights and opportunities.  The International Women’s Development Agency explains it well: 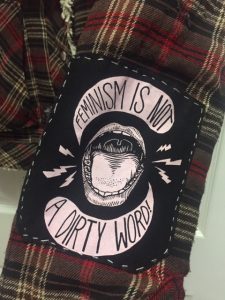 It’s about respecting diverse women’s experiences, identities, knowledge and strengths, and striving to empower all women to realise their full rights.

It’s about leveling the playing field between genders, and ensuring that diverse women and girls have the same opportunities in life available to boys and men.

What’s not to like?  I’ll bet you, dear reader, are a feminist!  A wise friend once said regarding political debates that we all probably have a lot more in common than we think…

So Baldwin was right on about patches displaying a “distinct identity.”  One look at my jacket will tell you not just some bands I like, but my liberal leanings and where I’ve gone for vacation; if nothing else, it’s outerwear covered in ice breakers.  And if there’s one thing The Scene (and the rest of the world) needs these days, it’s ways to find common ground.  Stay tuned for more Show Me Your Patches in 2019!

What’s on your battle vest??