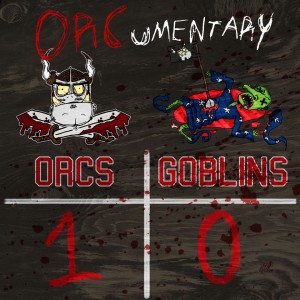 ‘Incomparable’ is a difficult adjective to use appropriately. Everything in music is relatable in some way to something else, influences will often tell in the composer’s tendencies. And after thousands of years of purported civilization, all of the stories have been told. It’s a unique perspective that keeps these same, re-treaded tales fresh, and an original application of existing elements is what keeps a musician’s offerings intriguing. ORCumentary has taken influences in both storytelling and music-making, and created something compelling and singular that still hearkens back to its origins.

ORCumentary mastermind and sole musician Orc Adams has achieved for medieval fantasy what New Orleans legend Damien Storm has for horror; one man has taken a devotion to a genre and created an entire catalogue of metal that pays fitting tribute. The means by which one person can create an entire album’s worth of music have become more accessible than ever, to the point where even a handheld mobile device can simulate guitar, drums, you name it. Adams has put these methods to good use, and applied the techniques in a way that doesn’t distract the listener. Truth be told, the drums sound electronic, but paired with a variety of voices, synthesized horns, strings, hell even accordions at one point [“Black Forest Ham” is a winner]… the listener forgives the virtual band and starts pumping their fist and banging their head to the destruction of all goblins, elves, dwarves, and humans.

I was told that the material speaks of J.R.R. Tolkien’s world specifically, as a tribute to Lord of the Rings and all of its related literature. A quick Google and Wikipedia delve shows no sign of Gor-Nacular (this story’s Orc God of Battle) or D’Lagrolon (referenced in the ominous and triumphant “Plains of D’Lagrolon” off the album). While an edition of The Bair Truth with Orc Adams is inevitable, I can only speculate at this point that he has created his own medieval fantasy realm, including characters that exist within it, which bear similar motivations to prototypical orcs. Meaning, of course, the complete obliteration of everyone else.

One thing that is particularly interesting to me is that Adams’s orcs are clearly at war with goblins in this go ‘round, when they are often allies against men and elves in similar literature. I like this deviation, it’s like big brother’s disdain for little brother, or meathead’s contempt for nerd, the latter a comparison I drew from the album artwork. On the CD’s cover, a blood-splattered scoreboard proclaims the orcs’ dominion, and a goblin’s corpse wears star-patterned wizard’s garb (everyone knows fighters are cool and mages are lame).

Much of the music is driving and militaristic, and rightly so, but delicate keyboard interludes or intros provide a welcome contrast at many junctures. As alluded to earlier, any number of instruments can be heard, and it all fits in splendidly. Orc Adams employs guttural growling most of the time, but surprises at several points with clean singing and even some falsetto crooning. He’s a very ‘legible’ growler, and following along with the story is never too difficult. You’ll find yourself chuckling aloud, the rhymes tend to be clever and the subject matter is far enough gone to be both intense and ridiculous. Seriously, being cut down by a sword is rough, but being “Strangled By Your Own Swordbelt” is that and outright shameful. These are heavy metal limericks for everyone who watches The Two Towers whenever it’s on HBO for the fight scenes at Helm’s Deep.

If you, like myself, can’t believe this is all one guy, catch ORCumentary at any of these upcoming shows. And unless he’s a barren recluse, scorning humanity to grovel in a dark cave for Gor-Nacular’s favor, expect an edition of The Bair Truth to further illuminate the world that ORCumentary invites you to glimpse through the portal that gives way to the “Goblin Death March.”