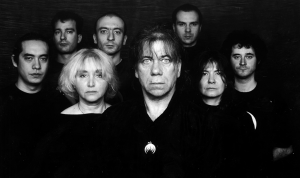 It’s satisfying to know that there’s a progressive rock band out there that takes the negative tags associated with the genre and runs with them. French progressive band Magma have answered critical statements like “pretentious,” “bombastic,” and “pompous” with a “hell yes we are” defiance since the early 70s. And they remain to this day an unclassifiable, almost mystical presence in the music world. Their fans range from old prog rockers to metalheads and hipsters, drawing in a diverse crowd undoubtedly due to their diverse and entirely unique traits. And though their range of sound is wide, they’ve remained true to themselves since the beginning. They’re a difficult band to get into for some, going out of their way to ensure they don’t escape the perimeters of their cult audience. And I don’t think their audience would have it any other way.

What does Magma sound like? A goddamn action/adventure musical written in a made-up language. Yes, their lyrics are almost entirely written in Kobaian, a language invented by bandleader and percussionist Christian Vander. What’s even funnier, and maybe a bit frustrating, is the fact that Vander goes to great lengths to create these really awesome fantasy concepts that span entire albums, sometimes multi-album trilogies. But unless you commit many precious hours of your lifetime deciphering his language, you’ll never understand a damn thing about what’s going on. I don’t really give a shit about understanding it personally. The thought of it makes me laugh out loud actually. And furthermore, it forces me to experience this band as an instrumental act, giving me freedom to interpret the music in my own way.

Musically and compositionally, this band’s sound stems from three distinct musical forms. Magma is a rock band at its foundation. The root of their sound originates from traditional rock instrumentation like guitar, bass guitar, keyboard and drums. But that’s where the rock influence stops. The band’s music is largely built around a choral format, influenced by composers like Carl Orff. Each piece often contains a group of vocalists, male and female. Lyrics are sung in a rhythmic chant, sometimes tribal and primal like war speech, sometimes with a great deal of drama like a supernatural summoning or hymnal song. Instrumentation follows these rhythmic vocal patterns with pounding drums, rabid bass lines, whimsical organs, horns, even vibraphones. The effect is very entrancing and transporting, like some weird magical invocation that you can’t quite define. On top of this, the band infuses their music with the spontaneous nature of jazz. Christian Vander’s drumming in particular is infused with jazz, sometimes rolling off into free form unpredictability and blistering energy. The band also includes jazz improvisation into their live performances. All together, these musical traits create a subgenre of progressive music that Magma call their own: Zeuhl. Don’t you just love the pretense here? They’re like the most rebellious rock band on the planet, and they couldn’t be any further away from what many consider rebellious rock music.

In my opinion, this band has never made a bad album. But here are four personal favorites of mine.

I wholeheartedly recommend new listeners to start here. The band pulls out all the stops on this LP, and its relatively new status in the band’s discography gives it a crisp, modern production. It’s an energetic release, filled with punchy and heavy rhythmic and melodic interplay and rousing chants. Parts of it could even be considered as close to progressive metal as the band has ever come, which makes it a promising listen for metal fans. The “Hallelujah” finale is intense, anxious and practically transcendental.

This is technically a Christian Vander solo release, but the music is pretty much Magma in disguise. Recorded live, this piece is instrumentally stripped down, consisting predominately of bass guitar, drums and keyboard. This makes the wide range of dynamics on this record rather impressive. Some sections are heavenly and soft, almost sacred; others are militant, masculine and powerful. As a whole, the album is like an exploration of the range of human emotion through celestial, inhuman sound.

This is the band’s most recent release, consisting of one 30 minute suite and a weird, monotonous outro song. The suite is spellbinding, with a sound palette split in half. The first part is delightful, consisting of washes of grand piano, shimmering cymbals and angelic vocals. The second half is more lively, but still rather playful and light-hearted, alternating between an epic tribal workout and a celebratory polka. It’s strange, fun and beautiful.

This is probably Magma’s most well-known release. It’s a dark and barbaric record, rife with blasts of thunderous horns, medieval war choirs and aggressive rhythms. The production is dirty and somewhat raw, adding to the overall primitive and malicious mood of the record. The outro is the only part of the album that could be considered accessible, offering a peaceful conclusion to music filled with conflict and depravity. It’s an awesome record, but maybe not the easiest introduction to the band.