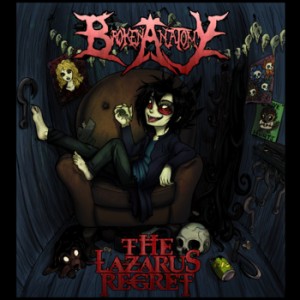 This mainly one-woman funeral doom project has teased listeners before with a series of shorter releases, but Broken Anatomy finally gets the chance to unleash her tortured vision over the course of a full length.  The results are very grim and deliver on the promise of those past releases.

The Lazarus Regret opens with an eerie instrumental in “Prologus” before the first proper track, “The Count Of Groundsoaking Blood” rears its ugly head. A quiet guitar figure gives way to monstrous half-speed of half-speed riffs with some synths layered on top. This gives the music a nice doomed ambience. Finally, the vocals kick and they range from a feral growl to the demomic screech effortlessly. If anything, Samantha Michelle Smith’s vocals have become more powerful and scary.

“Redemption In The City Of Death” starts right off with the hell-spawned vocals, with the synths giving it a bit of classic horror movie soundtrack feel. Eventually, the bottom drops out, and the pace picks up just a bit, and the vocals come back more powerful. “Standing At The Precipice” features some quiet, almost jazzy parts at its head to shine a little light in the darkness, while “Waves Crashing Upon The Shores Of Discordia” ends the album on one long, bad trip.

Funeral doom is an acquired even for fans of extreme music. For those who like it slow, low and depressive, there is much to like about this release. This is one sick slice of depression and anger, and it’s all the better for it.