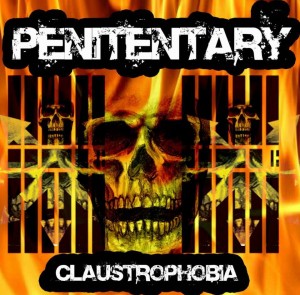 Anybody that knows Bill Klopfer knows that he’s a busy man. I don’t believe a single day passes without a riff being written. You can look at his metal band resume as proof of his prolific nature. He’s currently a crucial part of the bands Murder Castle, Kaos Reign and of course, Penitentary. So here we are, faced with another Penitentary offering with Claustrophobia. And what does this album offer? Brass knuckles right into your face. Let me explain that ringing in your ears in detail.

I’ve always envisioned Penitentary as the AC/DC of the local metal scene. No matter what, you know what to expect when you watch a show or spin a CD. And what you get is some of the most abrasive, in-your-face thrash metal you can imagine. Their sound is a weight-lifting bully that throws you in a choke hold and never lets up the shit-talk. It’s a drill sergeant depleting what’s left of your pride and dignity with his pro-war lecture in the middle of a bloody battle. No matter what, it is unrelenting and intense, never for the faint of heart. Bill’s vocals solidify this persona with his scolding bark. He’s not some scary monster, or some frightened, screaming soul in the midst of a wintery hell, he’s a very pissed off human being.

The band is all about pulling you in to a maelstrom and keeping you there. Whether you’re in the midst of speed metal blitzkrieg, a concrete pile of breakdown debris, or a breakneck thrash car crash, the heaviness is always there no matter the tempo or time signature. But don’t mistake all this weight as something that wears you down. Because ingesting music this heavy only sizes you up for a mosh fest. This is music to rage to. This is music of straight up rebellion, and no wasting time getting to that rebellious fucking point. Here’s Penitentary. They use extreme metal as a vehicle for their aggression against the system. The music of Claustrophobia reaffirms a fitting album title. This release is inspiration for a mass breakout from a tightening trap of social unrest, intolerance and a doomed future.

This brings me to the lyrics. Each song seems like another character at his wit’s end about how to escape from a detrimental situation. The only solution, when there is one, is violence. Accusations are made against the self, corrupt authority, wicked temptresses and tyrants of both individual person and populous. Sometimes things end badly for the character, and sometimes the character overcomes. Win or lose, the songs never have a happy ending. Somebody is going to die. The music is the battle; the lyrics are poetry sketched by the stress of battle.

The band is currently the duo of Bill Klopfer on guitar/bass, vocals and Randy Bailey on drums and percussion. The lack of personnel isn’t noticed at all. These two can clearly handle a full band sound. And with Penitentary, there never was any need for extra musicians, at least far as the studio is concerned. The writing is still just as solid, abrasive and rhythmically flawless as it’s always been. And considering their prolific output, the consistency of their inspiration is impressive. It’s great to know that no matter what happens with any future band member prospects, these two remain the heart and soul of what Penitentary is. And what are they? Two of the most reliably pissed off and in-your-face professionals of the CT metal scene. If you like knuckles in your face just as much as I do, grab Claustrophobia as soon as you can!