Connecticut hard rockers Crossing Rubicon have been in the headlines a lot lately — from press releases on blogs worldwide to a news blurb on Blabbermouth, and most recently a “haterade” column on Metalsucks that mercilessly tore the band apart…. And garnered their lyric video “Unhinged“ thousands of views on Youtube.

On October 23rd, I met four of the band members at Cherry Street Station in Wallingford, CT to find the real story beneath publicists’ presentations and web trolls’ insults.  Guitarist Zach Lambert was unable to attend, but vocalist Scotty Anarchy, drummer Brandi Hood, bassist Jeanne Sagan, and guitarist Steven Riccio froze their buns off on a picnic bench talking about the band’s history, their upcoming album release, interpersonal dynamics, and what they think of all this press. 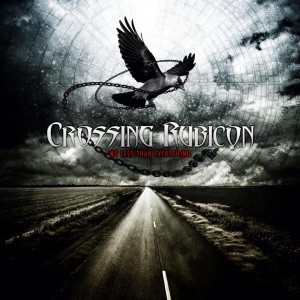 Some excerpts for the lazy….

The CD release show on November 21st (at Bleacher’s in Bristol):

Scotty: We’re just about ready to release our first full-length CD, No Less Than Everything, which is gonna be available in Connecticut November 21st for hard copies and available worldwide in January.  […]

(The release show) is an all day thing — doors are at 12:00, the show starts at 12:30 and it’s gonna go til close.  I believe we have eleven bands…  Basically if they’ve been a part of our family for the past four years, we wanted them on this bill.

AltCtrl: Can you reveal some of the bands that are on there?

Scotty: Yeah!  First of all, Rise and Resist, Simple Machinery — two younger bands who are just awesome.  In the Red, Demons Past, Agrippa 93, Sever the Drama, Continuum, Vision Within, Stockholm Syndrome, Lament… Jessie, unless they’re at your show, they’re at our show!

Brandi: We just had a big ol’ conversation about this at dinner!

Scotty: I’m gonna hand this over to these guys then, Brandi and Steven…

Steven: Is that the best idea? (laughter)

Brandi: Well, my tag line’s always been that I’m a rock drummer in a metal band — we have metal riffs, a rock drummer, and a melodic singer, so that’s what sets us apart from everybody else.

Jeanne: But you always scream balls out, too —

Brandi: Yeah, well I scream and sing — but now Jeanne — now we have the screaming, singing, chick-badass-motherfuckers on rhythm.  And now Steven is writing riffs that Scott and I are struggling with because he’s melodic, and I’m rock, and Steven’s metal… So the progression is great!  When we bust out with the next album, it’s gonna be completely different, but at the same time you’re gonna have all of us at the core — because you can’t change the drummer and you can’t change the singer.  These guys are a force like nobody’s business to be reckoned with.

Scotty: Steven’s playing […] a lot more harmony stuff and because Jeanne’s bass tone and her playing is so aggressive, it’s a lot fatter and gives both guitar plays the ability to take new melodic leads to a totally different level.  And what’s cool is that it’s a lot of the stuff that was on the record, but that we couldn’t duplicate before.

The band’s love of vocal harmonies:

Scotty: I’m gonna break this secret out now… I was a choir director.  […]  Sacred Heart High School Choir and St. John’s Watertown Church choir — so I like a lot of vocals.  To me, if you have four or five people in one band, most of them should be singing.  So I got everything I always wanted in one band!

The age range of the current lineup:

Jeanne: We go from 21 to Alzheimer’s.

How having an engaged couple in the band affects the group dynamic:

Scotty: That’s a huge question… It’s probably cheating for me to answer the question first, but Brandi’s my sister and she has been for about twelve years now.  Zach’s kinda come along, and Steven, they’ve always been like part of the family.  So it’s just another member of the family.  We’re just the couple that has sex together…. (laughter)

Jeanne: If I was a diva, it wouldn’t work out.

Brandi: […] If it was any other gal than Jeanne, we might have an issue.  But she’s the coolest cat in the entire world, so it doesn’t even matter.

Scotty: […] She could take the simplest conversation and turn it to necrophilia like that!

Jeanne on leaving All That Remains:

AltCtrl: Did you leave All That Remains for Crossing Rubicon, or are those things unrelated?

Jeanne: They’re unrelated.  I was in both bands all summer and for whatever reason I decided to leave All That Remains, and I was playing in Crossing Rubicon so that just became my main thing.  […]  It was more of a coincidence than anything else.

Scotty: You’ve got nothing but a bunch of 40-year-old virgins waiting to shit-talk the next person that comes along that they’re jealous of.

Jeannie: How did we become such a target?  I’ve never had so much press in All That Remains in my entire ten year career (laughter) until I had to quit and then was in another band.  And the suddenly….

Scotty: I really wanna thank Metalsucks for all the publicity they gave us.  […]  I got a phone call from the guys in Queensryche who were reading the article, and they were like, “Scotty’s a good-looking guy and he’s in a band with two attractive women — he’s gonna get hated so much more than just this.”  Bring it, haters!

Brandi: My favorite, I got called a “cougar” for the first time in my life.  (laughter)  “Dat cougar in the back tho.”

These excerpts are only a small slice of what was talked about.  If you want the real story — and a bit more from Steven — listen to the whole thing!  Find Crossing Rubicon on Facebook, Twitter, and the web for all the latest news from this up-and-coming band.  And for more from Alternative Control, like us on Facebook or follow on Twitter and Instagram at @AltCtrlCT!