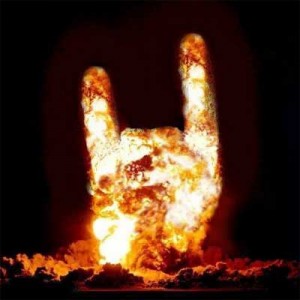 As a long time metal fan and musician I’ve only actually been an active member of the local metal scene in Connecticut as a performer since 2009, when the only way to get Agrippa93 our 1st show was to create it myself. The venue was an old discount movie theater that I rented out with my own cash inviting along 3 other bands for the night. I had absolutely no previous experience as a show promoter and less in the live scene as a performing band. Doing your first show is like losing your virginity: It was an awkward mess and you’re just glad to be done with it.

When we played as the last band that night it was to a sparse crowd thinned out from an already poor turnout. Most of the people in the bands who played earlier went home and took their fans with them. The theme has been the same since then and not just for us, but for every show that I’ve been to since then for almost every band. It’s not every band that does this, but the percentage favors the “cut and runs” over the support ones. The only time I’ve seen every band playing that night stick around for each other is out of a false sense of respect and doing so only because they have to in order to find out the results of a “Battle of the Bands” type of show.

Speaking of “Battle of the Bands” shows, are they partially to blame for turning band against band? Back in April we participated in Metal Test Final, a contest among local metal bands to win a spot for the New England Metal & Hardcore Festival at the Palladium in Worchester, MA. Although there were a few notably soured that they didn’t win in the end, I think generally the bands that participated were supportive of the winner, at least outwardly.

We once played way out in Norwich, an hour drive for us, at some hole in the wall venue going on last, which sounds like headlining, but it’s really the worst time slot for local bands. Every band playing that night, even the promoter of the show, took off before we went on. No one bothered to stick around to support us or was even just a little bit curious to what we sound like. We ended up playing an hour set to a total of 4 people, including the bar tender.

The same happened at a show in Waterbury, where once again we were the “headliner” and all but a few people here and there from other bands stuck around to support the rest. Like always, there were some half assed excuses why they couldn’t stick around to check us out. In fact almost every local show I’ve attended or performed at in the last 2 years has been the same with this pattern. After a band plays they pack up their gear and leave, taking all there fans with them.

From what I’ve experienced there is very little sense of brotherhood and support among the musicians in the Connecticut metal scene, most not even giving a shit about anyone but themselves. A93 has a few bands that we are close with and we support each other by promoting and attending each other’s shows. From what I’ve seen, that doesn’t seem to be the CT metal way, especially with the younger generation bands. The support for local bands is not coming from the bands themselves that play together whether regularly or one offs and I believe that this is a major problem in a struggling metal scene. Word of mouth is an essential part of success and with the support of each other, everyone’s fan base will benefit.

Being there in the crowd for other bands playing that night before and after your set is the start of the solution. Pay your respects and you should expect the same from them in return. You may not like every band that plays and that’s perfectly fine, but every now and then there’s one that really stands out that you can get behind and spread the word about. It all comes down to the Golden Rule:

“One should treat others as one would like others to treat oneself.”

If everyone in the band community would adhere to this simple philosophy instead of the status quo, the Connecticut metal scene will build a strong network and be a force to be reckoned with.

Check out Agrippa93 on the band’s site, Facebook, or Twitter.  Also, visit Metal Cyndicate for band interviews, show listings, and much more!  Kind of like Alternative Control, without “books” and “fashion” getting in the way…