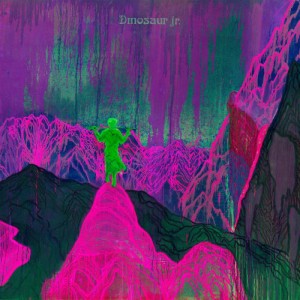 This was not supposed to happen.

Most people who know the history of Dinosaur Jr. would have never thought that the band’s original line-up of J. Mascis (guitar/vocals), Lou Barlow (bass/vocals) and Murph (drums) would get back together to record new albums and tour — especially after being apart for nearly 20 years after an acrimonious break-up.

Well, the impossible happened. Not only did they get back together, but they have released a string of quality albums that have strengthened their legacy. Starting with 2007’s Beyond and continuing with this year’s Give A Glimpse Of What Yer Not, they have been on quite a roll. In fact, they’ve put out more albums in this iteration of the band than when they first started.

In fact, this new one Give A Glimpse Of What Yer Not, their third for Jagjaguwar, is not only a good Dinosaur Jr. album, it’s one of the better Dino Jr. albums in their storied history.  Their playing is totally on point. Mascis is in top form, but so are Barlow and Murph. They give the album a little extra kick. Plus, all the songs are choice. So, you get a band firing on all cylinders.

The album opens with the hard hitting one-two punch of “Goin Down” and “Tiny,” which showcase the band in full on rock mode. “Goin Down” is a hard charging tune, powered by a killer riff from Mascis, and bolstered by the propulsive rhythms of Barlow and Murph. Plus, it contains, the first of many ripping solos from their esteemed guitar player. (Like most of their albums, he shreds all over the album. Yes.) “Tiny” continues further down the rock rabbit hole established by the first track. “Be A Part” a bit more restrained, but still very catchy.

“Good To Know” is another grungy rocker, that leads to directly into what I consider the album’s massive centerpiece, “I Walk For Miles.” This track features a monstrous sludgy riff, along with two ripping solos from Mascis. One is placed in the middle, while the other shreds all over the coda. It’s just one big ball of gnarly grungy rock. It stomps like their name. One could see this going down really well in the band’s amp demolishing live set. “Knocked Around” starts out mellow and turns on the jets halfway through, bursting into some loud, urgent rock, complete with another patented solo from Mascis.

In addition, Lou Barlow gets two songs on this release. Both are excellent. “Love Is” is a rollicking, semi-acoustic slice of dark, indie rock, while album closer “Left/Right” splits the difference between their heavier and jangly sides, quite well.

It’s a guarantee that they’ll play a selection of these songs when they open their upcoming tour at the College Street Music Hall in New Haven on September 7, more than likely at true ear bleeding volumes. So, remember to bring ear plugs.