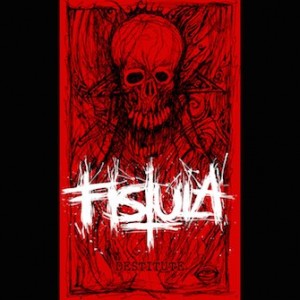 For a release that was recorded live with vocals recorded separately, the entire five song onslaught comes off as a companion to Vermin Prolifocus (released in 2014 on Patac Records). Fistula is a band that hails from Ohio; their veracity is a driving force throughout each song and their masterful use of dark samples is a trademark as well.

The first track, properly titled “Firstborn,” doesn’t waste anytime letting you know that Fistula has a message: no holds barred, let’s get fucked up and fuck. The slow, pressing riffs tear into this album, flowing directly into second track “Morgue Attendant.” Bluesy riffs devolve into a silence, then the bass gives you that rhythm of dead sex, mortified mothers, and crying siblings.

“You’ve led a trite and meaningless life, and you’re a bad person.”  That sample brings you into track four, “Destitute,” a very raw celebration of monumental self-loathing.  Fistula has no problem reminding you of “the dog shit on your shoe.”  This is my personal favorite on this mortuary platter of ear noise.

The last track has the best loop yet, great for a song titled “The Time We Bought Dope From The Cops”: “We take your drugs just for fun!”  This track shows off the rock and blues aesthetic that is bedrock of Fistula’s sound. Halfway into the song it appears the high is over, but then they bring the “fuck you!” right back: “There is no Easter bunny, there is nothing nothing nothing!” I love me some samples that enhance and morph a song and a sound; again this is another masterful album by Fistula.

We look forward to the next release, coming soon in 2015. In the meantime, order one of the 200 CD releases for Destitute on Patac Records Here: http://www.patacrecords.com/distro/Fistula-Destitute-Demo-CD