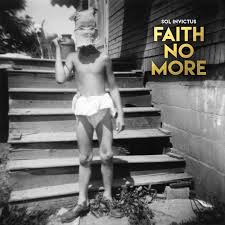 Faith No More has returned. Many of us thought that we’d never see the day. The band had reunited for touring, but a studio album is a different beast. It’s skeptical to think that a band who hasn’t released new material in almost 20 years could muster up the old creative magic. And what do Faith No More fans expect exactly? Do they want an album of 90s nostalgia or something completely unexpected?

I feel pretty confident in stating that Sol Invictus is the album Faith No More fans needed. It’s just as much a look into the past as it is a statement of the present. The band is older, perhaps a little more reserved, but just as unpredictable. Faith No More was always an oddity in the rock genre. At a basic level, they’re definitely a hard rock band. Their music is rife with memorable hooks and sing-along choruses. It’s all the flare the band throws on top that separated them from ALL the other bands of the alternative pack. I’ve always called them the gateway band for fucking everything. You can easily be pulled in by the catchiness of songs like “The Real Thing,” “Stripsearch,” and “Evidence.”  And when you’re in with these songs, you realize that you never knew you could like thrash metal, electro-pop or R&B music. The band is fearless when it comes to diversity, which makes their exact identity pretty hard to pin down. And that’s what fans like me love the most.

Speaking about getting pulled in, how great of a comeback song is “Superhero”? It features everything that’s best about the band – attitude, epic propositions and anthemic strength. It could end up as one of my favorite tracks of the year. A lot of this album, although maybe a bit quieter than I’m used to, feels really bitter. There aren’t a lot of overly loud and bombastic moments of anger, but you can feel the scathing hate and discontent in this album. There’s a potent sourness dripping off of tracks like “Cone of Shame” and “Rise of the Fall” particularly. An abundance of piano featured in most tracks help to soften the tension throughout and adds a strange hospitable feel to the album’s overall side-of-the-mouth dog growl. It’s like being invited into somebody’s home so they can drunkenly bitch to you about how your personal flaws mirror the eventual downfall of society.

It’s endearing to know that the band still has a legitimate edge. A song like “Separation Anxiety” is a piece of complete paranoia in fact. But I can’t help but feel that something here sounds forced. I think the band is trying a bit too hard at times to sound young. “Motherfucker” is just a dumb song. Its overuse of cursing is juvenile and the overall vocal pattern is awkward and cringe-worthy. The inflection in Patton’s voice in the verses of “Black Friday” makes me want to punch him. It’s the little annoyances, especially lyrically and vocally that keep me from being completely behind this release. The album also blows its load too early. The first five songs are almost flawless. The first half is colorful, prideful and ambitious rock music (maybe some of the best rock music I’ve heard lately). The second half is just teenage bitchiness that fails to keep up the pace. The exception is “Matador.”  That song is a towering triumph of oppressive acrimony.

All in all, I like this album. I don’t absolutely love it, but the six songs I do like a lot edge out the throwaway tracks enough for me to give this a solid 7 out of 10. It’s difficult for a band so favored for material they wrote two decades ago to suddenly reemerge and convince us fans that they still have what it takes. I give the band a lot of credit for managing to prove itself as creatively viable after so long. They could have easily fell face first and failed.