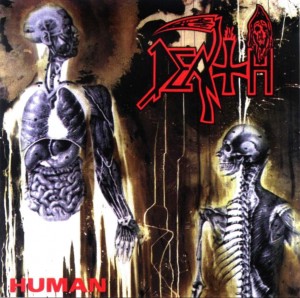 There comes a time when a musical group needs to reevaluate its standards. And this need for change happens for a variety of reasons. Sometimes a group needs to morph its sound to fit in with shifting trends, like many bands had to do when the MTV age of 1980s music forced progressive rock groups to strip themselves of excess artistic flare. Other times, a group will simplify its creative ambitions for commercial gain. There are a few instances when groups decide to stick with a formula they feel works best for them. Such is the case for bands like AC/DC and ZZ Top. But then there are those who tread a true progressive path, building and widening the borders of their sound out of desire for artistic growth. Many bands have done this, but it’s rare that an already established group of innovators choose to abandon their patented confines and journey further into exploration. Death is one of those groups, and Human is their gateway into uncharted territory.

The album sits between two vastly different eras of Death’s excellent career. Before it, the murky, gory and nihilistic dissonance of their death metal roots growls with putridity. After it, the serpentine riffs and progressive metal extremity of the band’s disparaging philosophical concepts gleam like the triumphant towers of hell. Naturally, Human borrows from both identities. The album is ugly, sinister and thick but way more ambitious than the band’s earlier material. Death has yet to perfect the flourishes found on The Sound of Perseverance, but you can clearly tell the direction they’re taking. A song like “Vacant Planets” features a great deal of tempo variance and sudden shifts in energy, but the mood is vile throughout and the attack is still somewhat straightforward. “Secret Face” has a lumbering sort of complexity at the thirty second mark, with each riff tumbling into the next in a steadily descending fashion. But then a harmonious melody enters, builds into a cascading solo and the song reassembles its second half to a steadily ascending resolution. “Cosmic Sea” is an even further departure, composed of minor scale harmonics over an eerie symphonic backdrop that deteriorates into bubbling ambience before ending with a rolling riff over a soup of trebly weirdness.

Even though Human happens to be Death’s best-selling album, I feel like it gets overlooked a lot. Conversations about Death seem to revolve around their final three albums, when their progressive tendencies were fully incorporated. And of course there are those who are nostalgic for the cut-and-dry brutality and fierceness of the band’s beginnings. But I find Human to be something special in their discography. Gateway albums are usually the most interesting, because of an uncomfortable melding of two clashing styles. Simple death metal ethics have little in common with artsy connotations, and yet here they reside in awkward agreement. Human may have its brain loaded with socialistic disparities and dark science fiction concepts, but it still feels the need to plainly beat your fucking head in. That kind of juvenile intensity is sacrificed on later releases, which is only natural. Chuck Schuldiner had to grow up, and I love the group that Death became. But I still have a special appreciation for Human. It’s a death metal album that’s content to eat the light of stars but still ponders on what lies beyond the void.

Love Death?  Get your ass to Cherry Street Station in Wallingford on Friday, May 13th for Xenosis Plays the Music of Death!