Yesterday, Alternative Control had a sit-down with Xenosis guitarist Mark Lyon to talk about the band’s new album and their sure-to-be-triumphant return to The Scene next weekend.  Sowing the Seeds of Destruction will be released July 18th at The Outer Space in Hamden, following a long hiatus that had many wondering if Xenosis would ever rise again.  Indeed they shall, with vocalist Jeff Haddad and guitarist Ernie Delvecchio joining longtime members Lyon, Gary Marotta (drums), and Dave Legenhausen (bass).  Here’s what Lyon has to say about all that:

But for the impatient, a few highlights…

On the teaser track, “Turn Over Thy Crown”:

“I wrote almost all of it in one night, but then I kinda sat on it for awhile.  Then I finally wrote the little proggy section, and a couple weeks later I came up with an outro for it — which is usually not the case, usually I just write everything in one night.”

Of course he does.  Fuck my life.

“Guitar Pro is definitely helpful because we can send it out and everyone can read the charts and listen back to it with the video game sounds.  Then there’s the speed trainer on it, which helps a lot, because some of the riffs are pretty tough — so you can sit there and play the riff over and over again at one speed… Gary’s a beast, though!  I can write crazy drum parts and he can just read them and play them.”

On working with Nick Bellmore of Dexter’s Lab Recording to mix and master the new album:

“He is fucking awesome and I certainly recommend working with him.  He’s super-easy to work with, really reasonable rates, and he really just brought the album to life.  It’s difficult, especially when you spend so much time working on the same songs… To get them to sound really good is tough, because your ears are shot by then.  So to bring in another person at that point […] was one of the best moves we ever made.”

On he and Ernie working together:

“We’re different players, so I think it really works out.  You can tell the difference when it’s me or him. I like to think I’m like more of a Chuck Schuldiner, while he’s more of an Andy Larocque if you’re into (Death album) Individual Thought Patterns.  […] There’s Chuck’s solos, which are kinda dirty, and then Andy Larocque’s solos are perfectly neat and smooth.  […] That’s kinda how we are…  It’s really different styles but they complement each other.” 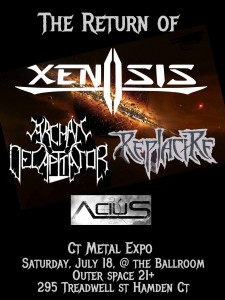 On whether Xenosis had anything else in the works that was ready for public knowledge:

Later that night, as we celebrated our interviewing success with rounds of Sip of Sunshine at Three Sheets, the band was confirmed to open for Suffocation at Cherry Street Station in Wallingford on August 21st.  If you want to know the other secrets as they are revealed, follow Xenosis on Facebook and Twitter.

See you at the Outer Space on July 18th — make sure to stop by the AltCtrl table for stickers, band merch, and more!