RPM Fest 2015 is an outdoor music festival hosted by Promotorhead Entertainment (operated by John Gulow) and PDP Productions (operated by Brian Westbrook). Supported directly by fans and local sponsors, this is the second year the event is to be held.  This year’s RPM FEST is August 28, 29, and 30 in Greenfield, Massachusetts, in a spot picked for its heavily wooded surroundings. This is a festival, so bring a tent, booze, food for grilling (NO GRILLS, THERE WILL BE SOME MADE AVAILABLE), and anything else you’d need for three days of debauchery fueled by heavy as fuck music on two stages. There is even a field for Wiffle Ball as well! This year there are 38 bands, some are not announced yet and from what I understand, Gulow and Westbrook are still accepting submissions for a headliner.

We’d had the idea to put on a festival showcasing bands from our local music scene for a while, but last April we finally decided to pull the trigger. ~ Brian Westbrook

With success of the previous RPM FEST 2014, Brian and John took advantage of the rolling momentum for this year’s event. Putting on shows in Western Massachusetts collecting donations and raising money for RPM FEST 2015. John Gulow (Promoterhead) has reviewed all of the bands submitted for playing RPM, 400 plus, and from that matched each band to other bands playing each day. The line up so far looks metal as fuck, featuring so many local and a few not so local.

The idea formulated over time with the palpable resurgence of local music in Western Massachusetts. Venues such as The Waterfront, 13th Floor Music Lounge (formerly Silk City), Platinum Pony, and Maximum Capacity hosted tons of these bands. Promoterhead Entertainment and PDP Productions threw a bunch of shows, gathering funds and interest in a event built by the bands and fans alike.

So with an idea the plan came together with Promoterhead and PDP Productions, with some help from the musical community. They had the resources to do a serious event, logistics, musical equipment, lighting & bodies to help shoulder the weight of putting such a event on. One this was missing and that was the location. Where does one put on a heavy music festival? Well I’ll tell you, deep in the woods of Greenfield Massachusetts, a place where there could be permanent stages built in place of rented ones from the year prior.

“We turned to Kickstarter and started taking donations at local Promotorhead shows and to help pay for the tools and equipment needed to clear the field and build the stages, eventually raising over $3500. The stages were completed in August of 2014 in time for the inaugural RPM Fest.” ~ Brian Westbrook

For 2015, Brian and John turned to Kickstarter once again — and raised more than $500 above their $4,500 goal, a testament to local fans’ faith in them and dedication to supporting the project.  (Check out the video on the RPM Kickstarter page @ http://kickstarter.rpmfest.org.)  The donated funds will offset the costs of the festival, which include equipment and materials to build a permanent roof on the stages and a platform for the sound guys, rental of port-a-potties, tables, chairs, tents, insurance, and permit costs.

If you missed the $30 weekend car passes that were available through the Kickstarter, you can buy one for $35 through the RPMFest website.  If the 250 spots are not sold out by the first day of the event, there will be some single day passes available —  Friday $10, Saturday and Sunday $15 each.  The address of the concert will be provided with the purchase of a car pass. 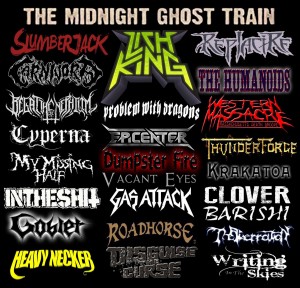 Here is a list of bands to play this year:

There will be sponsor and vendor tables set up with band merchandise, burgers, veggie burgers, hot dogs, drinks, as well as other random stuff — don’t forget to visit the Against All Odds Productions sponsor booth!  BYOB.  And as the festival is held on private property, remember to respect the place as you would your own.

You can find more information about RPM Fest at the following links: