Mike Livingston has been around the block and then some.  After traveling the world with hardcore bands 100 Demons and 25 Ta Life, he’s now back in Connecticut playing guitar in Bonded Through Hate and running his own record label, Ear One Productions.  In an email interview this weekend, Livingston talked with Alternative Control about the upcoming Axe Fest show, “the scene,” and what it takes to for a local band to go big.

Alternative Control: What’s new with Bonded Through Hate? Can you reveal anything about the upcoming name change, etc?

Mike Livingston: New singer, new songs, and new name.  In February of 2014 we recruited singer Chris Praml.  Before joining BTH, Chris sang for Kayotik and Drained of Life.  Chris brings a whole new more powerful and deliberate vocal style to the band — a more Hardcore/Death Metal style of singing, deep, hard, and shredding with easily understandable lyrics.  Chris has brought new life and strength that has inspired the rest of us to take it to a higher level.  We have a new song called “Annihilation” that nobody has heard yet that we are excited to unleash.

After much thought about the band name we all finally decided to change it and let the BTH name rest in power with our fallen brother and guitarist Ron Kuczuk. We have decided on a new name and are unveiling it at Axe Fest on June 21st.  We all agreed that we wanted to change the name to one of what we call “Ronisms.”  These were words or phrases that Ron used often. We picked one and decided it was perfect for us. We are pumped to release the new name with our new singer Chris.

AC: What was it like stepping into a band to replace someone who had passed away? 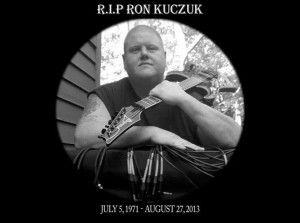 ML: Not easy at all.  When Ron passed away, the band was faced with the end of what they had created and started with him. I told the guys if they needed any help to let me know.  A few weeks later, bassist Aaron Spring and drummer Justin Lantieri asked me if I would consider joining BTH on guitar and keeping Ron’s legacy going.  I said absolutely.  I was happy to continue what the band started in Ron’s honor.

This was no easy task for me however.  Learning the riffs was one challenge but the harder part has been living up to Ron’s reputation as a creator of the CT Death Metal/Hardcore sound in other people’s eyes.  Ron is not replaceable.  We are only honoring what he started to keep his memory alive.  I personally miss his friendship and presence more and more as the months have gone by.  I met Ron in 1995 when I booked Tyrant Trooper on my Crunch Fest 95 show. Then with my band Drained of Life we played a few shows with his band Slumlord and we would have cool talks about gear and the Line 6 amp he was using then. In the last few years before his passing we actually became friends through recording and putting out the first BTH CD.  His contribution will be forever missed by all.

So…yes taking over on guitar where Ron left off has been a huge challenge but I stepped up to it without hesitation with Ron in mind. Every decision we make as a band we still ask ourselves what Ron would have thought, like when we chose our new singer Chris.  Ron knew and liked Chris and even referred him to sing for the band Kayotik.  Ron is and will always be a member of this band in spirit.  The last communication I received from Ron was a text thanking me for putting together the CD Release Party/Benefit at Cherry Street where we raised $700 for him.  He wrote “I just want you to know how much what you did for me last night meant to me…you’re a true friend.”  I will cherish those words forever.  Rest in Power, Ron Kuczuk. 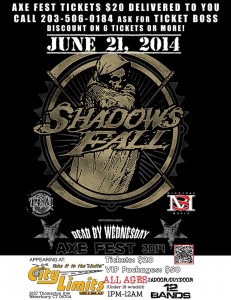 AC: How is Ear One Productions involved in Axe Fest?

ML: Ear One became an official sponsor of Axe Fest being that it is Dead By Wednesday’s official CD Release show for their Death Of The Rockstar album out on Ear One — and also the fact that Bonded Through Hate was on the bill, another Ear One band.  We will have an Ear One/DBW merch booth with our merch girl Lindsey at the helm all day. We will have DBW CDs as well as our other Ear One roster bands.  Ear One also sponsored the Axe Fest T-Shirts with our logo printed on the sleeves.

AC: How does your label “get” bands? Do they approach you, do you approach them, a little of both…? What does Ear One do for a local band that they couldn’t do themselves – or couldn’t do as well as you?

ML: A little of both.  When we started it was just my label manager Jay Reason and myself scouting and signing bands.  I would approach them with an offer and they would accept.  As the label built a reputation for putting out the best CT bands… then some bands started to approach us. If we liked what they were doing we signed them.

Ear One can do for local bands what they can’t do for themselves.  While most bands are experienced with playing, recording and booking their own gigs…a lot of them need help with things they aren’t experienced with like promotion, websites, graphic art, getting your music sold online, manufacturing and marketing.  Besides these factors one of the main resources Ear One has to offer that most bands don’t have is financial backing and investment.  We invest in the bands we believe in and 90% of our bands have worked hard to return our investment and we have recouped it.  A couple bands have fallen off and broken up and that’s expected.

We are very happy with our bands and our track record.  With the recent signing of Dead By Wednesday Ear One has finally found what we were looking for: a band that is on a national tour, with songs on the radio and a video ready to be distributed worldwide all at once.

AC: How would you say that the web has changed bands’ ability to reach a large audience?

ML: The web has really leveled the playing field for everyone, (especially) indie labels and bands.  No more major labels holding all the cards anymore.  The web gives bands the same opportunity to reach their fans as the labels once only had.  Independent labels are gaining strength and credibility again as well as a result. Ear One has been recognized by larger labels in the business for doing the Artist Development that we do.  Bands and independent labels have access to the same markets but it still takes money and investment to do things on a larger level.  Social networks have increased a bands ability to reach a larger audience.  But…. As these networks like Facebook have evolved they now sell advertising to increase your reach and it has become necessary for labels like ours to take advantage of this advertising.   Bottom line again… it still takes money to make it.

AC: How has the web changed bands’ ability to be commercially viable, i.e. the members making something of a living playing music?

ML: Becoming commercially viable starts with songs that are commercial.  Then in order to break out of being just a local act a band really needs to tour around the country and have a video out everywhere.  In order for that to happen a band has to be able to jump out and tour for a month or two at a time.   Most local band members have jobs and/or families and other responsibilities that prevent them from ever touring.  We understand the difference and still support CT bands that are local or regional.

We do however strive to work with bands like Dead By Wednesday who have been touring for 10 years nationally and have had other record deals and gained national recognition with videos.  Dead By Wednesday has a song on their new CD called “When In Rome” which is super heavy but has a catchy chorus fit for commercial radio.  This sets them apart of the pack in this department.  Even DBW who are way ahead of other bands with their accomplishments are still working on making a living out of it.  Like Bon Scott said “It’s a long way to the top if you wanna Rock and Roll.

AC: How has the local music scene changed — for better or worse — since the days of your WNHU radio show?

ML: A whole lot has changed…for better and worse.  The main area where things are different especially with Metal is the fact that in 1985 we had maybe only about dozen different genres of Metal.  Thrash Metal, Speed Metal, Power Metal, Black Metal, Grindcore, Crossover, Glam Metal, Progressive Metal, etc.  Now in 2014 I would bet to say that there are more than 200 internationally recognized Metal genres or sub genres. Plus there are hundreds of thousands more bands then there was back then.

Locally this has become very evident with many sub genres of bands with their own little clicks and crowds. The scene is very segmented and specialized to the particular style.  In the old days there were way more mixed bills of different metal or hardcore bands on one show.  Nowadays most people do their own thing with just metal bills or just hardcore bills.

When I was a DJ at WNHU we had the power of the radio to unify and notify everyone of bands and shows.  This created a unified and large fan base of people going to shows all the time.  Also before cell phones, computers and the web…all there was just TV, Radio, Magazines and Shows. The one thing kids had to do was go to the concerts.  Now kids can stay home and watch and follow their bands on their PCs, Phones, and Tablets.  The way we got the word out back in the day was to make a cassette demo, make flyers and plaster them, fanzines, college radio and word of mouth.  We live in a different world now.  Technology has made this all better or worse depending on if you take of advantage of it or get rolled over by it.  As far as radio goes… it’s all satellite and online now.  College radio is still viable but more for indie bands.  Commercial FM radio has diminished in importance.  Videos are king now for promotion.

AC: If you could give one piece of advice to young and not-so-young local bands, what would it be?

ML: Practice your craft obsessively, work hard, educate yourself about every aspect of the music business, never give up or let anyone deter you from your dreams, be realistic about your goals, and be dedicated and persistent.  Eventually it all pays off in one way or another.  And also know that there are no guarantees for success.  Lastly…keep yourself entertained and have fun!

AC: If you could have a reunion show with one old band, which would it be and why?

ML: If I could reunite with one band from my past I think it would be Radium.  That was the first band I was in where I stepped up and became a guitarist/singer front man in 1988, and also the first band that I put together. We had the most fun playing and recording and it was a great bunch of dudes.

…And that’s a wrap.  See you at City Limits on Saturday!  Also, check out the Axe Fest pre-party at Cherry Street Station in Wallingford, Thursday 6/19…. And keep it fucking metal!