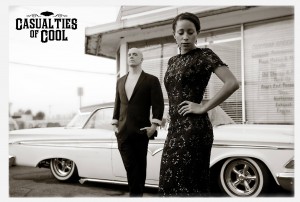 A review of a Devin Townsend album. What a surprise, right? Well don’t worry, I’ve decided to give this review of his new album Casualties of Cool a solid critique based on an honest analysis, and not in my own well documented fandom. But just to make things clear, Devin Townsend happens to be one of my favorite people ever. It’s difficult sometimes to admit faults in your heroes, and too easy to defend them at delusional levels. And as much as I want to try and convince people that this is one of the greatest albums ever, I know that that doesn’t make for great journalism, and will probably result in people distrusting my musical opinions. So, I’m willing to cut the bullshit and review this album without the sensationalism.

Anybody who has been keeping up with Devin’s recent musical escapades shouldn’t be shocked that this album is completely separated from his metal persona. He’s already delved into new age, ambient, soft rock, and pop on albums like The Hummer, Ki, Addicted and Ghost. So how is he trying to piss off metalheads this time? By writing an album that takes tons of influence from country music and blues. Now don’t be mistaken, this is in no way a country album. It’s more of a progressive rock album with a strong country/blues sound. Devin has explained in various interviews how he grew up with country music. It was part of his household and upbringing. So in many ways, this record is a bout of nostalgia. This is Devin finding his roots and composing a testament to his childhood.

But despite this journey back in time, he hasn’t forgotten the values that make his music powerful and unique. There’s still that wall-of-sound production that makes you feel like you’re being subjected to some cosmopolitan vaudeville show. The chaotic background ambience that fills his music with nuisance is still here, if maybe a bit toned down to allow softer instrumentation a front row placement. His emotional sensibilities come through beautifully as they always do. On the song “Moon”, he showcases one of his biggest strengths – the ability to take a simple repeating vocal line and just a couple musical ideas and build them into an incredible and emotional crescendo. In this case, a Johnny Cash-style rhythm is coupled with a heavily reverbed lyric and a walking bass line. These three trot along, picking up added instrumentation along their way through outer space. Soon saxophones, a clockwork ticking, chimes and the fucking breathtaking vocalizations of cowriter and singer Che Aimee Dorval collide together in a gorgeous, flowering climax so full of life and energy, that I get goose bumps every time I hear it. Shit…I’m starting to get all fanboyish. Settle down now, settle down…

So what the hell does this actually sound like? It’s a mixed bag for sure. The country/blues influence is in there, but there’s a lot else going on. The one constant here is the fact that this is 95% of the time, a pretty mellow release. But the album also has a great amount of variation in its instrumentation. Lots of acoustic guitar, flutes, saxophones, gentle ambience and odd percussive elements. Some songs are cut-and-dry singer/songwriter ditties (“Daddy, Forgive Me,” “Bones”), a few others are sprawling, symphonic power ballads (“Flight,” “Moon,” “The Bridge”), and there’s definite weirdness (“Deathscope,” “Pier,” “Hejda”). However, if you don’t fancy yourself a fan of the mellower side of Dev, this album probably won’t change your mind no matter how versatile it is. Can I come up with some ridiculous comparison to help give you an idea? How about Pink Floyd, Enya, Johnny Cash and The Allman Brothers had a foursome and this is the cum bucket mixture they came up with. Eh, maybe that’ll just confuse you.

I don’t mean that analogy in a negative way. I happen to like this album a lot, no big surprise there. But yes, I do have a few criticisms. First of all, this album is probably a bit too long. I find myself losing focus during some of the quiet weirdness that I feel really just comes off as filler. If Devin did a little editing and formulated this album as a solid set of ten or twelve songs, I’d probably be more inclined to give it my full attention.

Secondly, even though this happens to be a concept album with a very in depth story, I couldn’t give a shit about any of it. The lyrics taken by themselves have moments of brilliance. In the song “Broken,” when the male choir sings the line “She won’t care for me,” I almost dropped a tear. But the story just seems pretentious, even for me. I also wish Devin would start basing lyrical themes around things that don’t have to do with outer space. I think he’s taken care of the whole “the universe is big and mysterious” thing with Ziltoid the Omniscient, Alien, Infinity and the upcoming Z2 album. To me, lyrics that were traditionally country would have suited this music better. A guy and a girl from Mississippi are singing about loss and regret while tripping on mushrooms. That’s what I feel this album should have been coming from.

I also can’t understate the importance of Che on this record. She really becomes the star of the show on many of these songs, and Devin allowing her the lead vocal is one of the best choices he made. Of course I love his voice, but her singing is PERFECT for this music. She’s got a twang in her accent, a sly kind of croon in her delivery and she can wail like a gospel singer when she wants to. I almost wish she was more prevalent on the bonus disc, which is available if you buy the deluxe version.

I’ve talked to people who actually prefer the bonus disc to the actual album. It consists of various tracks and demos that didn’t make the album, as well as tracks leftover from the Ghost sessions. Devin mixed and sequenced these tracks in a way that made it seem like the second disc of a double album. It’s a softer, more ethereal and atmospheric sister CD, with many great attributes of its own. It’s totally worth shelling out the extra money for. “Ghost Wives,” “Perspective,” “Drench,” and “Dig for Gold” are personal highlights.

To wrap it up, I applaud Devin yet again for choosing to expand his musical repertoire. He’s proven time and time again that he has the ability to branch out into other genres and create something genuine. Whether it’s country, industrial, new age, pop or metal, he manages to conform himself musically into his surroundings without losing his identity. And maybe that’s because no matter where his music goes, his objective is always the same. This is a man who writes about his life, and his music reflects his mental state. When a person is that honest and open with his music, no matter what he does, it’s going to come out sounding natural. In the case of Casualties of Cool, although I don’t necessarily enjoy the metaphor this time, he’s using music he grew up with – the naivety of childhood as a vehicle for his optimisms about the future. And if we keep getting quality music like this, I’m pretty fucking optimistic too.