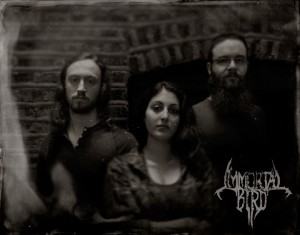 Immortal Bird deal in the type of loud, discordant music that will make many fans of extreme metal grin from ear to ear. Main woman Rae Amitay (drums, vocals, lyrics) formed the band originally as a one time project to blow off some steam. She recruited a couple of friends in guitarist Evan Berry and bassist John Picillo and recorded the Akrasia EP, which was released on Closed Casket Recordings late last year. The EP garnered some great reviews, so she decided to move the band forward, which included making plans for a follow up recording, as well as taking the project on the road. They will play Cherry Street Station in Wallingford on March 7, along with local heavy hitters Sea Of Bones and When The Deadbolt Breaks.

We sent Amitay a few questions about the band. Here are her answers.  (You will not want to miss this show.)

What made you originally want to do this project? Were there some demons to be exorcised? Did it do the trick?

You pretty much nailed it in the question itself. I had a lot of things on my mind, some aspects of my past that I hadn’t addressed enough (or at all), and I chose Immortal Bird as my outlet. But I learned very quickly that once I’d “exorcised” my first round of demons, there were plenty to take their place. So, the project continues.

Also, this was also conceived as a one off. What made you decide to continue on with this as a recording project and touring endeavor?

I’ve done a decent amount of touring as a hired gun, and I thought that was all I wanted to do. There’s a level of comfort in learning pre-recorded material, performing it to the best of your ability, and then being able to remove yourself from it once the job is finished. But there’s also a lack of connection and investment, which I didn’t fully realize until I started creating my own music. I’m finding that while there’s a lot more to lose, there’s also a lot more to gain.

How personal are lyrics on the album? Did performing these the way you perform them provide a catharsis?

They are extremely personal, but I’m at peace with what I’ve put out there. I think it’s funny when an artist will write incredibly personal lyrics and then refuse to discuss them. This project was conceptualized for my own reasons, but I chose to put the music out there. If people are connecting and questioning what I’m saying, then I want to have a conversation. To deny people that opportunity comes off as overly brooding and pretentious, in my opinion.

Were you surprised, albeit in a pleasant way, on how well the Akrasia EP was received? How? Was that another reason to continue on with it?

I think all of us in the band were a bit surprised, because we had no idea what to expect. We’d shown very few people the material before it went out en masse, and it was the first Immortal Bird release. Evan and I had never written together prior to this project, and we had no idea how to genre tag ourselves. I would be continuing with Immortal Bird no matter what, but having an actual ‘demand’ for more material feels really good.

The songs touch on many different styles of extreme music, but all blend together cohesively. Was it your intention to mix up different genres this way? Also, black metal seems to be a pronounced influence on this record. What is the importance of black metal to this recording?

It wasn’t our intention at all! The only thing we knew for sure was that it was going to be something heavy and dark. We never sat down and said, “Let’s make a black metal record.” I figured it’d end up being some sort of blackened crusty progressive death amalgamation because of the influences and preferences that Evan and I were bringing to the table, and that’s basically what we ended up with. As for the importance of black metal, I enjoy the raw emotion and blistering quality of the genre, but I wanted our overall production to be cleaner and more ‘deliberate’ than on most archetypal black metal recordings.

Why did you decide to let someone else handle the drum chores in the live setting? Is it so you can rage and go ballistic without being confined by the kit?

Again, you pretty much answered this in the question! That, and I needed to be realistic about the physicality of drumming our material. I have tendonitis and a chronic hamstring injury that really can’t handle the demands of touring on the scale that I’m striving for with this band, at least not with drum parts as tough as ours! Garry has a wonderful grasp on our material and an unparalleled work ethic. With him behind the kit, there’s no worries. I can focus on what I need to be doing onstage without worrying about whether or not my ‘vision’ is being realized. He nails it. With that said, drumming is still one of my great loves, and I will continue to play on our albums and perform both vocals and drums if/when Garry is unavailable.

How does this project differ from the other projects you are involved with?

This project is the most different because it is ‘mine’. Thrawsunblat, my other band, is extremely important to me, but it’s very much Joel Violette’s artistic and compositional vision. I, along with Brendan (Hayter, Thrawsunblat’s bassist) both have a lot of freedom and open dialogue in regards to the material, but there’s no mistaking that Thrawsunblat is Joel’s “child.” I am honored to be a part of that band, and it’s been a fantastic outlet for my drumming. Immortal Bird is more of an emotional outlet, and it’s a project that I’m building from scratch where I can experiment with my role and direction.

Now that you’ve decided to continue on with Immortal Bird, what are the future plans? Can we expect a full length in the near future? Or more touring?

We’re writing more music, but whether or not that turns out to be another EP or a full-length is still a bit ambiguous. Today, I’m thinking it’ll be a full-length, but if you ask me tomorrow, I might say something else! As far as touring goes, yes, we’re planning on quite a bit more. We’ll probably go out once or twice this year to hit some U.S. cities we’ll miss on our Northeast leg of shows. Once we’ve put out a follow-up to Akrasia, I’d like to tour more extensively, and internationally.