By Jessie May, Matt Mullarkey, and Christopher Baldwin

If you’re friends with local musicians on Facebook, your news feed is probably filled with posts about “coming early and staying late” and “supporting all the bands.” But how many bands actually live by what they post? Alternative Control writers are often in the audience at local shows, but several of them get up on stage as well. Here’s what they’ve observed about bands “sticking around” to watch the sets of the other bands they’re on a show with…

First let me preface this by saying that I don’t think audience members are obligated to stay for an entire show. Of course it would be nice — but maybe if an adult wants to spend their hard-earned money and their Saturday night to see two bands out of four, that’s their prerogative. Guilting them about not “supporting the scene” enough isn’t going to get them out to more shows.

Bands who are playing the show, however, are obligated to get there early and stay late. But from years of evidence collection, I’ve determined that the only band who actually does this is Stamford punk outfit Matt and the Marauders.

My first draft of this article went through the last four shows I played and gave some CSI-Miami-level analysis of who was there at the end of the night. I don’t know if the resulting list was comically absurd or absurdly comical, but let’s just say that the norm is to leave one guy to get paid while everybody else splits shortly after their band’s set. (Except for Matt and the Marauders.) Didn’t matter whether the show was in Stamford or out of town. Didn’t matter whether I booked it or someone else did. Didn’t even matter which band I was playing with. And if people got paid before the last band went on, forget it. Ghost town.

I have to admit, even my own band didn’t have a perfect record. Jimmy Junk Bird played an all-day fest a couple months ago and I ran out of Scene Power around 9:30 (after arriving at 2:00). I was tired, out of beer money, and frankly didn’t want to stand around for another four hours… So I left.

All-day fests aside, of course band members have long drives, babysitters, work in the morning… But maybe if every band member except for one has those obligations every time you play, you should reevaluate whether your band should be playing shows in the first place.

I’m not saying that there will never be a time when someone has to leave a show early; rather, I’m saying that the ratio should be flipped. Most or all of your band should be present at the end of the night, rather than just one lone schmuck waiting to get your share of the door. I’d lobby for an all-day fest exception — four hours of festing? six? — but aside from that, Jimmy Junk Bird will be playing all future shows with Matt and the Marauders. And only Matt and the Marauders. 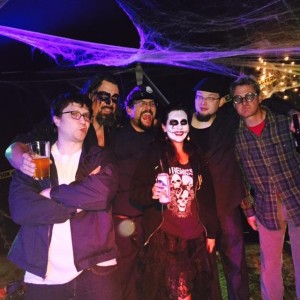 Seriously, though…. I hope our show at Cherry Street on November 21st restores my faith in humanity. Look in the mirror, bands. If we don’t support each other, who will?

Opening bands splitting before the end of a show has been a major pet peeve for me and the rest of my Lost Riots crew. Two incidents that stick out to me:

1.  Last May we opened for The Independents and a band they were touring with Black Cat Attack. (whose bass player was kind enough to loan me his bass head after mine died on stage) Before us was another band whose name my memory has since erased. They were younger guys, maybe early twenties, came down from somewhere north in Connecticut. As soon as they were done playing they were packing up and heading out. They must have already been out of the parking lot by the time we hit the stage 15 minutes later.

2.  Now this one is REALLY messed up. A few years ago we played a multi genre bill in Hartford, and some local pop punk band who was “supposed” to be the big draw showed up late, and them and their girlfriends wouldn’t even come inside to see any of the opening bands. We were on right before them and one of them FINALLY came inside and told the rest of his band that there “weren’t enough people there”, and they took off and never played their set.
(My singer Jeffrey Thunders RIPPED them apart on the mic for that, and once again their name has since been erased from my memory.)

For me, it’s become clear that whatever the scene once was and once represented is pretty much under constant desperate resuscitation. Promoters and bands work their asses off to form something huge and collective and most often times the grand idea fails, because the reality is that average music fans and music consumers around here don’t really give a fuck about a local music scene, and never have.

People want to get drunk and have a good time. People want to forget for a while that they have adult responsibilities and they want to do it as cheaply as possible. An everyday couple or group of friends that have no personal connections to the local bands that are playing on a given night will always, always pick a cocktail house party or a downtown cover band bar over original entertainment. Because being entertained by music that you’ve never heard, and quite possibly under genres you’re not used to hearing, takes work.

Let’s face it, people usually don’t appreciate new music the first time they hear it. When you purchase music and listen to it in your car or at home, it takes a little effort and patience to realize if you like it or not. The same holds true for live music. It takes extra effort to enjoy an unfamiliar act. And if the band doesn’t have a particularly lively stage presence (which there are many in the local scene), then the enjoyment factor deteriorates even more. But house parties and cover bands take no effort. Just get drunk, catch up with friends and sing and dance to songs you know the lyrics to. That’s a successful night out for most who really just need to escape the monotony of the work week.

So no wonder people don’t want to stick around for bands and music they don’t know. No blame rests with the audience. Because at the end of the night, the people left supporting are friends, not fans. Friends are really what make this scene what it is. This is a network of bands and friends of bands and very little of anything else. And frankly, there’s not enough friends to go around sometimes. And we ask a lot from our friends by trying to force them to stay for an entire night of local music when all they’re really trying to do is be supportive towards their friends. If a band plays and doesn’t attempt to stick around and support the entire night, then why the hell should their friends make the effort?

Therefore, any kind of successful night in the scene depends first on the attitude of the bands playing. If they can’t bother to be supportive for everyone, then there is no such thing as a local scene. It’s just different cliques coming and going through the course of the show.

But maybe that’s not a bad thing. Maybe at this point, being in my 30s, all I need is to write music and play it for my friends. I have a great job, lovely wife and terrific friends. Everything else is a bonus at this point. I’ll continue to support this scene however I can, by writing reviews and going to shows. But perhaps it’s time to switch focus from the scene as a grand network, to just a fun way to get together with friends, get drunk, rock out and take some silly group photos. Let’s take the seriousness out of it. Let’s stop treating it like a mission. I feel like there’d be a lot less anger and stress over the situation.

What’s your opinion, readers? When you play a show, do you journey to the end? Should you have to? Leave a comment to let us know what you think.