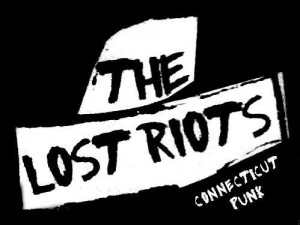 As lead singer/rhythm guitarist for The Lost Riots, Jeffrey Thunders fronts one of the best punk bands in the state, though he would never say that. Their heartfelt and sincere mixture of hardcore punk and garage rock, makes them one exciting proposition whether on the stage or on wax. The Lost Riots have won the Best Punk Band award twice at the CT Music Awards, which just goes to show that their hard work is not going unnoticed.

Aiding Thunders in his quest for rock n roll action are lead guitarist Sean Beirne, bassist Matt Mullarkey and drummer Noel Tomasz. You can usually find them some weekend, or even some week days, wrecking a stage in some dingy club somewhere in CT. They are relentless giggers and constantly strive to get their rock out to the people.

So with the impending release of a new Lost Riots recording in August, we decided to send Thunders some questions about the Connecticut music scene and his bands place in it, along with some questions pertaining to his promotion of the garage punk scene in state and a few of his other side-projects.

Enjoy this interview with a true Connecticut original.

You’ve been in bands for quite a while now. In your opinion what are the strengths of the Connecticut music scene? On the other side of the coin, what are its weaknesses?

Right off the bat this is a tough question. Haha! I would actually say there are smaller scenes within the state. The Punk and hardcore scene is very supportive and the bands really help each other out. Even with a big setback of the El N Gee closing (leaving a void for all ages shows) the “scene” still thrives. I hear there are great hip hop scenes in New Haven and New London. There’s an indie scene in Danbury and Willimantic.  And of course New London has a great supportive rock and roll scene. The weakness that I can see is that all the scenes don’t mingle. You can have some great shows with a mixed bill. That also helps to get your name out there. You never know when you can win a fan over. We have played plenty of mixed shows and have had a great time doing so.

I come from more of a hardcore/punk background and Sean our lead guitarist is a rock and roll guy, citing Chuck Berry as his major influence, so when we talked about starting a band we had intentions of it being more like The Stooges meets The Reatards. Sean was calling it caveman rock. We started out going for more of a garage feel. We both kind of pushed ourselves to be slightly different then what we have been doing. I feel what we have become is ever evolving and will continue that way. Is it what we set out to do? Maybe? Maybe not? A lot of bands from the 70’s ( Heartbreakers, Dead Boys) will say that Keith Richards was an influence. Who was Keith Richards influenced by? Chuck Berry. Matt and Noel have also been contributing to writing songs for the band lately  so we have plenty of songs to keep us going for a while.

For the past two years, the Lost Riots have been voted Best Punk Band at the CT Music Awards. What does this mean to the band? What does it mean to you?

The CT Music Awards is a lot of fun. Win or lose it’s a blast and I can only see it being a lot more fun down the road. It’s a public vote so as far as us winning two years in a row it means a lot to us that people across the state took their time and stuffed the ballots with our name. We work hard at this band and it’s a sign that the hard work is paying off.  To me personally its slight bragging rights. I joke a lot about becoming an “award winning musician”. The Trophies are actually sitting on my mantle in my house tough! Do I think we are the best punk band in the state? No. Bands like Cry Havoc, Damn Broads, and Dead City Riot are out there bleeding on the floor almost every night of the week. Those bands deserve recognition. However it’s a good time and brings bands and people together in the state that otherwise would have no idea who you are.

Also, what was your intention for starting the Connecticut Garage/Punk page on Facebook? Why did you do this? Do you think it helps spread the word on this style of music?

Ultimately I would like to believe that on the social media side of things that the Ct garage/punk Facebook page is making a difference. It’s still new and I’m still trying to get the word out there. Connecticut has some really, really good garage bands that go unnoticed. I got the idea from a group of kids that have a garage/punk page in NYC. The two styles can fit really well on a show together and that’s why I wanna bring awareness to this sub-genre. Maybe in time the page will get some followers (I also started a Tumblr page too).

You have a new record coming out very soon. How is it different than your last record? How is it similar? Also, I heard you got to use some equipment from one of your favorite musicians during its recording. How did that make you feel?

The Lost Riots do have a new record and it sounds great! We added an organist on it. John Mordecai who was in Apse, The Tyler Trudeau Attempt, and ERAAS played with us and has since played live shows with us here and there. We recorded it at the same studio as “Downtown” in Peirmont NY with Paul Kostabi who was working with Walter Schreifels who was in the Gorilla Biscuits, Quicksand, and Rival Schools. I actually used Walters amp on the record! I must’ve had the biggest smile on my face when Paul told me to try it out. To play through an amp that was on some of your favorite records is huge for me. To have that sound on my record is bigger than anything to me. Such an honor. Yeah I’m still stoked about that one. I would say this set of songs means more to me. They are stronger songs and have a bit more substance. You can tell by listening to the new record that we have jelled as a band where as in “Downtown” we kinda rushed into the studio and just threw whatever on there. Bands evolve and one would be able to hear it on this new one. It’s a great feeling.

What drives you as a musician? What keeps you in the game?

I’d have to say discovering a new awesome band gets me excited a-lot and influences me to write songs. I also really enjoy seeing bands that we play with get press or notoriety. Getting positive feedback from peers within the Ct Punk scene also keeps me going and makes me wanna do more. It may sound cliché but the love of playing music keeps me in the game. If you consider it a job, or lose that luster for it you are sunk. Keep the PMA ya know? As long as punk is alive and well I want to be a part of it. I have met some of the best people in my entire like because of punk and hardcore.

What is the official status of Die Hipster Productions? I remember a post about a year ago, where you said you might be doing less with this. What is going on?

I really stopped booking shows. I got really down about people in bands complaining about time slots, or finance situations, or even the lack of help with promotion from bands on shows. I made a conscientious decision to do it only for whatever band I’m in and play with the bands I only wanna play with. Bands have to understand that just because they are playing a place like Café 9 doesn’t mean they are going to get a crowd. No, that’s not it. Promotion is huge. Some bands just don’t get that and that was one thing that really brought me down. They would ask why the room was so empty, or why am I only handing them $20. Well gee maybe b/c you didn’t bring anyone in the door and the bartender just gave his his/her tip money. I moved Die Hipster into more of a small label. Releasing what I want which usually is my own stuff. I have some things in the works with Die Hipster Records however.

In addition to the Lost Riots you have a bunch of other projects including the hardcore band, the Black Noise Scam and you’ve been known to dabble in some folk punk. First, what is the status of the Black Noise Scam? Will we ever see more music from them? And will there eventually be a folk punk release from you? (I know we’ll have to wait another four years to see The Olympics play again.)

From as far as I know The Black Noise Scam is completely done. Although Chris Beaudette (who was our drummer and now sings for NightBitch) and I have recently talked about doing some shows. So we will see. As far as new music? I doubt it. That band was a hell of a lot of fun and I learned a lot playing with those guys. They say there’s a brotherhood in hardcore and I believe it. No matter what happens in life I will always be friends with them and stay in contact with them.

A folk release is probably never going to happen. Oh god, I can barely play guitar, and sing in tune. I did that one track for the CT Indie summer Mixtape and that’s probably going to be it. Don’t go calling me Chuck Regan just yet.

The Olympics are fun as hell. Thrash/Punk/Metal/Sludge all mixed into 1-and-a-half minute songs. We play once every 2 or 4 years and all our songs are Olympic themed. We have titles such as “Hockey”, “Men’s Downhill” and “The Luge”.  You may not have to wait so long for that. Both Chris Beaudette and I love doing that band so that will never stop. Can you imagine us playing thrash music when we are well into our 60’s?  Just keep an eye out because you may see us sooner than later. 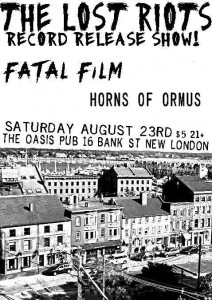 What are the future plans for The Lost Riots? What do you have in the works?

After we release our second record on August 23rd we will be heading out on an east coast tour. We will be heading down to Atlanta and back. There are also talks about a split with Sperm Donor in the works, and probably back into the studio to record another record. We are always writing songs so I want to get out as much material as we possibly can.