I’ll admit it. If there’s a girl in the band, I’m automatically more interested. Yes, I know it’s the twenty-first century, ladies can do stuff now, etcetera, etcetera… And I realize that it’s the hands and the vocal chords making the music, not the genitals. (If you can play guitar with your dick, call me. Right now.) 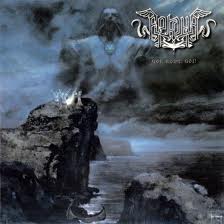 But secretly, deep down inside, I still care more about your band if women are involved beyond just lugging cymbal stands and driving your drunk ass home from the show. And on a serious note, most metal is inspired by notions of rage and violence, and I’m intrigued to see how the so-called ‘weaker sex’ is infiltrating this genre.

Anyhow… One band-with-a-chick-in-it I heard recently is Arkona, a Russian group on Napalm Records. My friend Johnny Pluckman came across them on the internet and said to me, “Hey, you like bands with chicks in them. Listen to this.”

Arkona is very folk metal, with a lot of flute and string interludes. In dedication to a folk philosophy, they gave up on synthesized sounds in 2005 and have since recorded their lush instrumental lines with real instruments.  Another unique thing about Arkona is that singer Masha “Scream” alternates between the beautiful, melodic vocals we expect of female folk-metal singers and growling vocals that are truly scary.

For an example of the beautiful singing, enjoy “Liki Bessmertnykh Bogov” off their 2009 album Goi, Rode, Goi.

But if you want to be transported back in time to a Viking melee, listen to”Pokrovi Nebesnogo Startsa” off 2008’s Ot Serdca K Nebu.

Ordinarily, you wouldn’t see Arkona unless you bought a plane ticket to Europe — but thanks to Paganfest, they’ll be at the Palladium in Worcester on 3/30, and then at the Gramercy in New York City on 3/31.  Joined by Turisas, Alestorm, Ex Deo, and Huntress, Arkona will surely impress audiences… And who knows when they’ll be back in the States?  If you want to see them, this is your chance.

A folk-metal-band-with-a-chick-in-it that comes around a little more often is Blackguard. Hailing from Montreal, they will be on tour with Kittie and The Agonist starting in April.  Blackguard sounds something like Finntroll or Ensiferum. You might not notice the requisite female, though, because she’s hidden behind waist-length blonde locks and a monstrous drumset. Founding member Justine Ethier maintains a pounding double-bass assault underneath Blackguard’s high-spirited guitars and keyboards; her relentless drumming is the core of Blackguard’s driving sound.

Every good folk metal band needs a triumphant drinking song and Blackguard’s is called “This Round’s on Me,” off 2008’s Profugus Mortis. Check out the tandem windmills and the guy waving his shoe in the air – and who’s the dude with the tri-cornered hat?

Blackguard’s spring tour with the other “lady bands” will take them through our area several times:

So, how long will it take for a female in a metal band to become as un-noteworthy as, say, a dude with a beard in a metal band? (I guess not until people like me stop writing articles about it…)  I don’t think we’re there yet, but “the scene” has come a long way since I first started going to shows in the days of Kittie’s Brackish — when me and my BFF were the only girls at the Hanover House, and my mother God-bless-her was picking us up at midnight in her Dodge Caravan.

Alternative Control is always looking for good bands to write about, whether they have chicks in them or not. Leave a comment or email your recommendations!

Originally published in December 2010, but edited to include current tour dates.