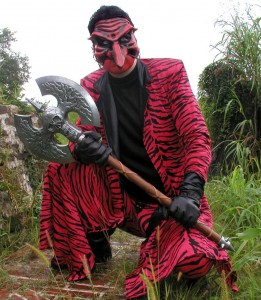 Reigning from New Orleans, Louisiana, Damien Storm is the most bizarre horror metal solo act you will ever encounter. From my first listen of Horror on St. Lime’s Hill, the music of Damien Storm has been in my head ever since.  The album contains killer riffs, melodic solos, off-beat drumming, and King Diamond-ish vocals.  It is a metal masterpiece and if you tell me otherwise I’ll cut you.

Damien first picked up a Gibson Les Paul at 13 years old after watching a performance by Ace Frehley of KISS.  His influences span from Black Sabbath, Iron Maiden, and vintage KISS to Judas Priest.  In 1993 he released Ghost Town, a full length concept album consisting of 13 incredibly creepy tracks.  But it’s his 2000 release of Horror on St. Lime’s Hill, in which Damien has defined his sound.  It’s atmospheric and at times chaotic, comical and/or horrific.  You’ll hear sinister samples between songs ranging from howling wind, echoing footsteps, zombies, ghosts and other macabre beasts. The video for “Raven in the Courtyard” captures the essence of Damien Storm.

Damien is well known amongst the Connecticut metal scene; Mark Lyon of Xenosis believes he is “the Leader of the Universe,” and I don’t disagree.  He’s also gotten the attention of Phil Anselmo, who signed Damien to his label Housecore Records.  I had the fortunate opportunity to talk with Damien about snakes, hurricanes, and his upcoming album.

NOLA has experienced yet another devastating hurricane.  Thank you for the opportunity to chat and I hope things are getting back to normal.  How did you prepare to weather the storm?  (Pardon the pun…)

Katrina started at a Category 5 and dropped to a 3 before it hit land while Hurricane Isaac took forever to become a hurricane and was only a Category 1.  After 2005 they built a seawall but I still lost power for four days.  It’s hot as hell and there are some looters amongst the wreckage but my heart goes out to those who experienced major flood damage.

Yes, nutria rodents.  Katrina washed in over 90 snakes into my house which I kept as pets for a while.  It was like a horror movie but I was having fun with them.  They’re not affectionate like cats or dogs and they’re better off roaming around than locked in a cage so I caught and released them.

Okay back to Damien Storm, first and foremost, where do you get those masks and is there a special significance to the NasoTurcobird-man style mask?

Years ago on my way to Tower Records, there was a store called Masquerade Fantasy that had weird masks in the window.  I eventually stopped in one day and liked the way they looked. 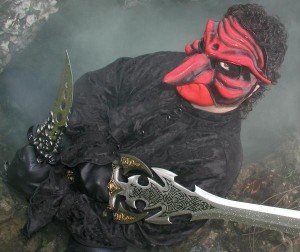 Will you stray from this style mask in future projects?

I more than likely will stick with the same look…maybe a different color.  They do get hot though.  I picked the longer nose one at first because of the song “Dr. Vulcan’s Laboratory Experiment.”  The songs were done before I had the look.  I wanted to be creepy and my regular face wouldn’t cut it. (My internet stalking has uncovered a picture of the man behind the mask and he is NOT scary!) Then there is the other mask which I use the most; it is more monster-looking.  The longer bird mask is hard on stage because it gets in the way, stabbing into my mic stand and chest, so now I use a mic headset.

It was a last minute thing.  I was doing a few shows with THOR and then Seth (Putnam) actually got me on that at the last minute.

Your guitar sound is massive; what guitar tuning and equipment/amplifiers doyou use?

I actually tune to basic E using a Peavey amp which goes through DigiTech processors.  I use Gibson Les Paul guitars on all albums and a Strat for some while adding BOSS effects.

Since you don’t work with a drummer, what type of drum machine do you use?

I use a Roland drum machine to program the drums to match the guitar parts.  Using a click track I record drum by drum until it fits.

You have a lot of off-timing drumming.  Do you like bands like Meshuggah or Death who are known for that style?

Funny you mentioned them.  I know those guys and they said my timing is weird.  I like to do strange things with different timing and some of the stuff is way off.

What inspires you and how do you approach the song writing process.

Old horror movies inspire me. I have a weird process; I get the title first then figure out a verse, chorus, intro etc.  If I have a title I can get a vibe of what I want in the song.

How do you feel about your vocals being compared to King Diamond.

I think it’s a compliment.  Weird thing is I never listened to King Diamond at first.  I thought about using low vocals, but felt high would be more off the wall.  Someone once said my vocals suck as bad as the dude from The Darkness.  I actually like The Darkness!

I love the Raven and Vulcan videos.  Any funny stories while filming?

Those videos were fun to make.  We had to sneak around to tape stuff, one time lying (and) saying it was a college project.

Is your next project a concept album?

It’s something I’ve wanted to do for ages.  It’s a sound effects recording, no guitar or vocals, entitled The Haunted Manor.  It has 27 cuts and it’s about a haunted house that Jonny Stane wanders in to.  It’s dark and chilling sounding with a lot of voices, screams, torture and other eerie things.  Imagine walking into a haunted house and hearing these sounds!  It’s all recorded and just needs to be mixed.

Author’s Note: Damien had been experiencing computer issues ever since the hurricane hit, causing our interview to end abruptly.  He hasn’t been online since, further perpetuating the mystery that is Damien Storm.