Editor’s Note: If you couldn’t figure it out from the title, this column is part of a series on metal etiquette. Vegetarian Metalhead just schooled the web on audience manners; now Jessie and Jeff have some tips for bands….

I’ve been playing in local bands for about ten years and booking shows for my own bands during that time. Here are a few practices I’ve learned through trial and error:

When It’s Your Show

When You’re Playing Someone Else’s Show

When You’re on the Internet 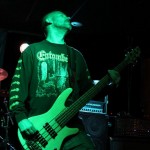 Like Jessie, I’ve been playing in bands for a decade and booking/promoting shows over that time. Metal manners, to me, are just common sense and extend beyond the music scene. The band members that never stay to the end of the show to support all the acts are generally the same people who clock watch at rehearsals and never know when show load-in starts.

All of the ‘manners’ I abide by can be distilled to one simple phrase: don’t be a dick. As a more refined concept, don’t do anything that makes life more difficult for those involved. Be on time for load-in. Be available for sound check and your set time. Wait until the previous band has cleared the stage before flooding it with your gear. Play the allotted set time and break down as quickly as possible. Be available for payment at the end of the night or make arrangements with the promoter ahead of time. Be flexible if an unforeseen circumstance arises and set order/time has to be changed.

Honestly, I think it is that simple.

Most of the bands I’ve worked with have been gracious and helpful. Those that have been an issue seem to have one common trait – lack of a good band ‘leader’ who is able to get the off-stage aspect organized and hold his/her band members accountable.

If you’ve learned anything from reading this column, it’s that Jeff is the only one around here who knows how to be succinct. What did we leave off this list??