New series here, folks.  Alternative Control will be hosting guest columns penned by people from all over the metal scene, about the nerdy things they love.  For our maiden voyage, “the most electrifying man in corpse entertainment” tells us about his favorite film, book, and video game.  Here’s the inner nerd of none other than… The Necrosexual! 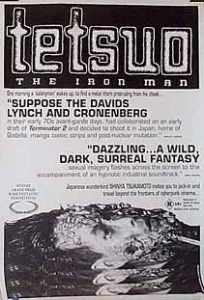 In this gripping Japanese film’s opening scene , a man jams a pipe into a maggot infested wound in his leg. Tetsuo is instant Necro N Chill material. Shinya Tsukamoto’s masterpiece is filmed in grainy black and white, like a manic cyberpunk version of Eraserhead, meshed with David Cronenberg’s body horror.  Tetsuo tells the story of an unassuming Japanese business man whose body slowly transforms into a metallic monster. A sort of twisted Kafka-esque transformation that speaks of the unholy marriage between man and machine.

Set in the massive urban sprawl of Tokyo, this tale of the civilized businessman turning into a metal abomination captures the conflict of our industrialized society expanding beyond control, destroying our planet in our quest to attain convenient material goods. Highlights include a scene where the business man literally sprouts a  killer boner in the form of an sewer drill during a breakfast date with a girl, screaming in shame as his monster erection saws through the table and  makes quite the bloody mess.

Tetsuo takes on a mechanical form in its visual and sound execution, much like the subject matter. The story is told through a disorienting assault of jump cuts, hallucinatory sequences and meticulous stop motion animation. Its sound editing is a constant rhythm of metal drums and whirring factory gears, clanking pipes and buzz saw white noise, to capture the encroaching madness . The few breaks of stillness and silence maximize the tension, reminding the viewer of the sensory overloading chaos to come.

But beyond the blood and metal, Tetsuo is a love story, albeit it a demented one.  Director Shinya Tsukomoto also stars as a metal fetishist who pursues the business man, tormenting and ultimately seducing the main character to embrace the steel demon within. 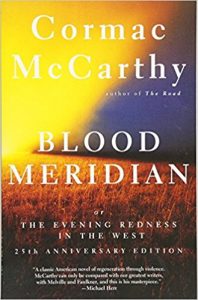 Blood Meridian: Or Evening Redness In The West by Cormac Macarthy

I’ll spare you another metal head gushing about HP Lovecraft. Instead, read Blood Meridian, a savage tale of the wild west. Blood Meridian follows a young boy, The Kid, and his gruesome misadventures across America and Mexico. The kid jumps from one gang of doomed scoundrels to another, and a great many characters are dispatched by way of via scalping, beheading, gunshots and slit throats.

Blood Meridian is the story of America. It is a reckless tale of conquest, murder and destruction, devoid of morality and meaning.  One of my favorite passages in the novel is a run-on sentence that takes up an entire page, describing an Comanche attack in grisly detail, down to one of the approaching savages sporting a the blood stained wedding dress.

Across their nihilistic journey, the Kid repeatedly runs into a completely bald, towering albino simply known as The Judge, who is one of the creepiest and bad ass villains in literature.  The judge is Satanic figure who is endlessly resourceful,  intelligent, and possesses a supernatural ability of staying one step ahead of his adversaries, no matter how bad the odds are.

Blood Meridian might not be easy reading .The language is poetic, terse and antiquated. I often found myself re-reading several passages to absorb all the detail and make sense of it all. But it is rewarding in the end, which is especially shocking and unexpected. 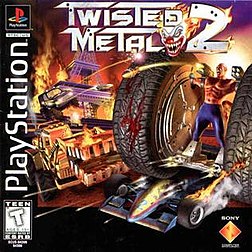 Twisted Metal 2 is like Mad Max conceived a backseat baby with Mortal Kombat. The premise is simple – a maniacal narrator known as Calypso hosts a global  tournament called Twisted Metal. The competitors must gear up in this demolition derby to the  death, and whoever kills off the competition first gets their wish granted.

Picking a favorite playable character in Twisted Metal 2 is like picking a favorite brand of Franzia boxed wine. They’re all an adventure to dive into, yet deadly. I’m a big fan of Mr. Grim, the Ghost Rider rip off on a motorcycle, whose screaming skull attack is the most powerful special move in the game. But, his light armor makes him easy to kill. Twisted Metal 2 balances each playable character’s strengths and weaknesses, so those with strong offense might be lacking in armor, handling and speed. Or, just enter the cheat codes to play as the demonic Minion, an unlockable boss who drives a giant tank and shoots missiles like Puff Daddy makes it rain money.

Twisted Metal has a gleeful sense of dark humor. Play long enough to win the game, and your character still gets screwed over in the end — Calypso literally grants their wishes in a “careful what you wish for” scenario.

Although Twisted Metal 3 and 4 were underwhelming sequels that added few improvements, and Twisted Metal: Black was a darker and joyless revamp of this classic series, Twisted Metal 2 remains a classic. They don’t make ’em like they used to.