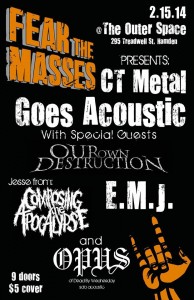 Doug from Fear the Masses is a family friend – his wife and my brother went to prayer group together when they were teenagers.  So when my bro asked me what I thought of their music, I said, “I dunno, I think they’re rap metal or something.”  But then I realized I had never given the band a hard listen.   I went to their Facebook page and downloaded a couple tracks – free like last weeks’ music, so they were “payday downloads” in name only.

For lack of a less obvious comparison, I hear a lot of Rage Against the Machine in the intense guitar riffs on the track “Vigilante.”  The lyrics share Rage’s revolutionary fury as well.  “Asylum Street Soldiers” and “Make Me Your Leader” bring the same pointed anger.  Fear the Masses doesn’t have time for girl problems or pretending to be the most brooootal; their message of political unrest, delivered through a combination of metal and hip-hop, will get listeners off their bar stools.  After hearing these three tracks, I would definitely go see them live.  Their next show is 2/15 at the Outer Space in Hamden and it’s acoustic – I’m curious about how all that Rage will translate minus distortion, but there’s only one way to find out! 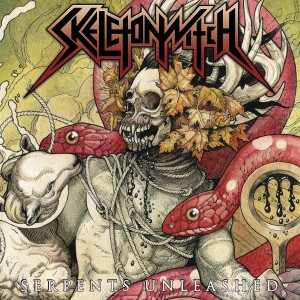 For our next segment, here’s a quick look at Skeletonwitch’s most recent release, Serpents Unleashed.  I’ve seen Skeletonwitch live once and watched some of their Youtube videos, but this my first time listening to a whole album.  I know I’m late to the party, but I was surprised to hear so much Scandinavian metal influence.  Some songs even reminded me of Amon Amarth, at points where a single-note melodic guitar line would sing over the surge underneath – tell me that doesn’t take you back to something off With Oden on Our Side.  (Makes me kick myself for missing last night’s NYC show, especially since Snowpocalypse 2014 has given me the day off from work today!)  Another thing that stood out was the bass presence in the mix – lots of creative lines that weren’t buried by everything else.

Bottom line, I really enjoyed Serpents Unleashed on the rides to and from work yesterday.  Our resident death metal dude Jeff Miles says he prefers Breathing the Fire — people who have listened to Skeletonwitch for more than a day, what are your thoughts?

PS: Here’s the Youtube video that first made me curious about Skeletonwitch.  If you haven’t seen it, definitely watch!