The NFL is a non-profit organization.

You’re fucking kidding me, right?!  There is nothing more “for-profit” than pro sports.  And this info isn’t just something I read in a Facebook meme – according to Forbes Magazine, the NFL rakes in 9.5 billion a year, but is given tax-exempt status according to some outdated 1960s tax code.  Thanks a lot, jerk-offs, I’m glad that your behemoth organization is tax-exempt while I bust my butt…  (Still watched the Super Bowl though.) 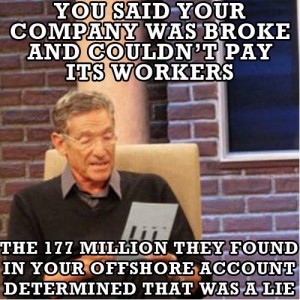 The Headbanging Hostess shared a great Facebook meme about this one – and when I read the accompanying article, I was thoroughly depressed.  Basically, Visiting Nurse Services, which is the largest home-health-care provider in the country, claims to be $70 million in the hole and wants to cut employees’ benefits to make up the difference.  Meanwhile, as of 2011 they had $177 million in “Central American and Caribbean investments.”  Hmmmmmmm…

The thing that especially bothered me about this is that being a nurse is supposed to be a “good job.”  You have to go to college.  You have to deal with every type of bodily fluid.  You work nights, weekends, and holidays.  But at least you make bank and get good benefits, right?  Apparently not.  One nurse told PolicyMic.com, “I don’t want to go on strike.  I’ve got bills to pay, a kid to raise. But I also don’t want my daughter to lose her health insurance.”

In the 1960s, you didn’t need an education to make a decent living.

Yes, I know that the 1960s weren’t a walk in the part, especially if you were black, female, or a draftee.  Still, the thought that someone could graduate from high school, get a random job, and have enough money to afford an apartment is astounding to me.  Salon.com’s article The “Middle Class” Myth: Here’s Why Wages are Really So Low Today takes a look about how unions in the private sector – or currently, the lack thereof – affect wages.  Using the meatpacking, steel, and fast food industries as examples, author Edward McClellan posits that wages are driven by workers’ bargaining power rather than the skills or training needed to perform a particular job.  Read the article to find out why an eighteen-year-old kid shoveling metal balls into a furnace in 1965 made more money than college grads in entry-level white collar jobs do today.

I don’t want to sound like a radical, but there is something wrong with America’s economy today.  People shouldn’t have to accumulate tens of thousands in debt to get an education or raise a family, but that’s the state of our nation – and as long as corporations get their tax loopholes and regular folks have credit cards to keep them happy, that’s how it’s going to stay.