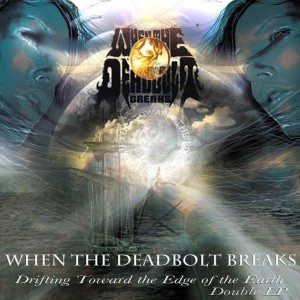 Some bands instantly make sense.  The album spins, notes pour out of speakers, and the listener’s brain captures the signal, converting it to something it can process.  As a voracious consumer of music I have a tendency to compare everything I hear to something I’ve already been exposed to as a point of reference.  There are musical endeavors that just don’t fit this mold and require the ability to free your mind from the common construct to truly appreciate what the artist has to offer.  The forthcoming release from Connecticut hessians When The Deadbolt Breaks [this writer’s vote for best band name EVER], entitled Drifting Toward The Edge Of The Earth, is not something you can break down in one listen or fully comprehend until you’ve allowed yourself to be consumed by the lumbering power of its contents.

With this dual album release WtDB have created a journey through time and space where angular riffs and pounding drums push and pull before backing down into single-note patterns.  The entire time I listened to the first disc I pictured a group of adventurers in a boat floating across the sea to places unknown.  The waves toss and turn, threatening to hurl the passengers into cold depths before the storm suddenly breaks.  The sun begins to shine down on the battered crew offering a moment of hope and peace.  If, at gunpoint, I was forced to compare WtDB to other artists the best I can do is say they mix the aquatic, funeral doom of Ahab with the bombastic attack of Neurosis but even that doesn’t do this material justice.  Maybe toss in a bit of Motörhead while Isis and Cave In trade punches in the guest bedroom? 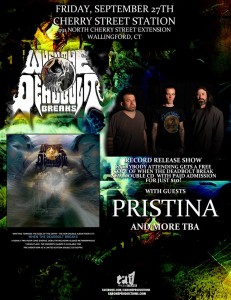 I’ve been unable to conquer this release properly in the past month so instead of trying to find the words – I implore you to check it out yourself and see what you make of it.  Grab a hearty stout, burn a candle, kill the lights, and soak it all in.  My bet is you will be both as bewildered and impressed as I am.

Drifting Toward The Edge Of The Earth will be officially released on September 27th at Cherry Street Station in Wallingford.