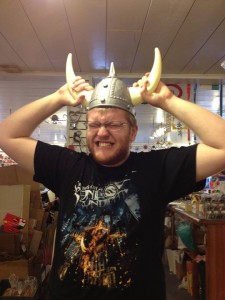 Some time ago, I had the distinct pleasure of reviewing ORCumentary’s most recent release, Orcs 1 Goblins 0. I love metal. I love medieval fantasy. And I love when an artist can take their craft seriously but have fun at the same time. This stuff is pure gold, a dragon’s hoard of songs about vanquishing enemies. One man is responsible for all of ORCumentary: he calls himself Orc Adams, and he composes all of the music, plays it all, and sings it all. He employs several distinct voices and tells tales about a handful of characters, and manages to make a one-musician act sound like a marching horde of monsters. The story takes place in a world that hearkens back to that of Tolkien while existing entirely of its own volition, and I said in my review that I wanted to have a sit-down with Adams to discuss his universe. So without further ado, the long-awaited conversation with the brains, beats, and brutality behind ORCumentary.

Alternative Control: You are Orc Adams, the sole soldier in the army ORCumentary. A pleasure to make your acquaintance.

AC: What I want to get into is the world your music takes place in, but let’s begin with the music itself; do you only play keyboards?

ORC:  Yeah, just keyboard. I’ve been known to carve flutes out of elf bones, but as of yet, I haven’t had the opportunity to showcase this skill to the world. 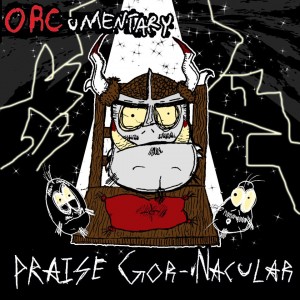 AC: Well you certainly achieve a massive sound, despite that. Everyone I talk to about ORCumentary asks why you don’t enlist more servants to trumpet Gor-Nacular’s glory. Is it because of your derision for every other race of beings, that you go it alone?

ORC: Thank you. ORC started in 2006 as a way to combat boredom and somehow it really clicked. Especially these past couple years with the Praise Gor-Nacular EP and onward, people are really getting into the music, and people come up to me after the shows and say how impressive it is that I am a solo performer. I’m pretty lucky that things have worked out like they have so far. I’ve considered putting a live band together once or twice, but ultimately I’ve decided to stay solo. The only way I’d work with a live band is if I were to do a special show or if I were to get signed and the label said “Get a live band.”

For the record, I am not seeking label support at this time, and don’t plan on it. I want everything to be 100% me for as long as possible.

AC: That’s interesting, considering what drives a lot of musicians is precisely that; get signed, get on the road. What makes you hesitant to embark on that voyage?

ORC: I’ve heard so many horror stories about how signed bands get raped by their labels, whether it be money-wise or music-wise. This isn’t always the case, of course, but it’s much more important to me that I make the kind of music I want to make than it is to achieve ‘fame’. ORC has been my creative outlet for 7 years and I am extremely hesitant when it comes to letting anyone else have a say in what goes on. While I do enjoy playing shows, ‘life on the road’ is kind of scary for me. I’ve done mini tours, but I like having stable income. As un-metal as that sounds.

AC: A sound argument, and a noble decision.  If the leader of the orcish armies can be said to be noble…

ORC: I wouldn’t say I’m ‘noble.’ On my next album, I have some very under-handed tricks up my sleeve for conquering the Dwarves.

AC: I can definitely relate to your concerns about touring though; as amazing as it sounds, there’s a lot that goes into constant travel. What other artists would you cite as your primary influences?

ORC: My biggest inspiration when creating ORCumentary was the Lord of the Rings movies, as weird as that sounds. When I started ORC, I didn’t even listen to screaming metal. It was more like “Hey, I can do a funny orc voice, why not make songs about it?” It took me a while to take it seriously. Musically though, it’s hard to say an artist directly influences me, because I’m not trying to emulate anyone, nor was I inspired to make music by a certain band. I love melodic death metal, folk metal, progressive, and power metal, and a lot of those influences are strong in the music I make. Ironically, my favorite band is Elvenking (the second metal band I ever got into). I also really enjoy Scar Symmetry, Mnemic, 3 Inches of Blood (they were definitely a big influence), Fear Factory, the list goes on. Most of the metal I listen to is singing-oriented, as weird as that sounds. Eluveitie is another one, mostly their album Slania. Not a big fan of their other stuff. Soilwork.

AC: Well, since you brought up Tolkien/Peter Jackson’s influence before listing fellow bards and minstrels, you’ve swung this conversation in the direction I am most eager to explore… the world of ORCumentary. So your primary medieval fantasy influence is indeed Lord of the Rings… Have you also read the books? Or simply enjoyed the films?

ORC: I have only read the books twice, once right after I saw The Two Towers and once as part of a college course (which was fuckin’ amazing; there was a Lit course on The Hobbit and LotR, as well as a science class on The Silmarillion and LotR). I enjoyed the books, but the movies were a revelation to me. It’s hard to say how they changed my life, but I had never seen anything like them and they are definitely the best movies I will ever see. In my opinion the movies are superior to the books and every change that was made was for the better. I want to re-read the trilogy but I may not get to it for a while, I have a huge ‘to-read’ list.

AC: Yeah man, fuck Tom Bombadil and barrow wights. So what else have you read? What’s on that mighty to-read list? We in Lyra (at least the guitarist and I) are giant Wheel of Time geeks; we’ve played together for a year and a half and two songs are already about Jordan’s fantasy masterpiece.

ORC: Wheel of Time is a series I unfortunately haven’t gotten into. By that time I had read a lot of series, and I am unsure if I want to commit to another lengthy saga. Blind Guardian has an awesome song about Wheel of Time. My reading list is basically re-reading everything in my library. Before this year, I had been ‘out’ of reading for a couple years. I’m currently re-reading The Heritage of Shannara quadrilogy, on the last book. Afterwards I’ll be re-reading more Terry Brooks, R.A. Salvatore, Dragonlance, Harry Potter, and I might try The Sword of Truth series again. I loved the first four books, but Book 5 was weird; after a few chapters centered around the main characters, there were like five chapters centered around completely new characters that seemed irrelevant. I’ve been recommended by so many people to pick up The Kingkiller Chronicles. No idea when I’ll get to that. 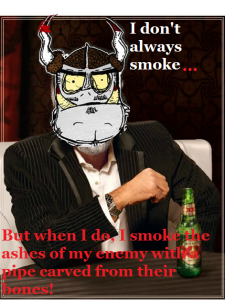 AC: It’s great to see how wide a range of material you draw from! I loved DragonLance, the Weis & Hickman stuff anyway. So your orcs, the world that Gor-Nacular inhabits, wreaking misery from his lofty seat… Tell me about it. If you need a starting point, how about the way that goblins and orcs are not aligned. Do your orcs rampantly destroy everyone else?

ORC: Right before the Praise Gor-Nacular EP starts, the orcs are not in a good place. A few hundred years ago, The Five Lands were in an almost constant state of war. The orcs had once been allied with the goblins, but they were betrayed by those green, scrawny, cowardly fuckers. As a result, the orcs were annihilated and the elves, men, dwarves, and goblins were happy and at peace. That all changes when Gor-Nacular ‘chooses’ Orc Adams, in the song Sword of Iron. Chooses him to bring about “Orc Supremacy”, where the other four races would be crushed under Gor-Nacular’s heel, utterly. My new album, Orcs 1 Goblins 0, tells the first chapter in that story, how the goblins were defeated. Each of my next three releases will be about how the dwarves, elves, and humans get their just desserts.

AC: Sweet! And can you describe Gor-Nacular, physically? What sort of being is he? And how did he come to power despite the trounced state of orcdom?

ORC: Well, he’s a God. Orc Adams, still a living being, hasn’t seen Gor-Nacular in the flesh yet, and only sees his head (bulbous, tusked, grotesque; a real orc’s orc, if you will) when in his dreams. Or when he “smokes the ashes of his enemies with a pipe carved from their bones,” which is a ritual where an orc can communicate with Gor-Nacular. Unfortunately, I haven’t thought about my world as much as Tolkien, so I don’t think I’ll be able to answer your question…yet. Insight may be revealed in later songs, but right now I honestly don’t know. A few hundred years after the orcs were utterly defeated, the balance of power shifted in favor of the orcs, so they could change their fortune.

AC: That’s great! And how far along is the next chapter? Taking on the elves next, if I’m not mistaken?

ORC: Dwarves are next, actually, then the elves and then humans. The story for the next album is very cool and surprising, Orc Adams will be faced with new challenges that will push his abilities to their limits, and he’ll be faced with some very difficult decisions. The plan right now is twelve songs (eleven on the digital version) and so far I have complete lyrics for five songs and music in various stages of completion for nine. I’m taking my time with this release though, shooting for Spring, 2015. I am extremely proud of Orcs 1 Goblins 0, and not only do I want to allot enough time to properly promote it (that album was in the works for at least five years), but I want to be sure that every track on the next album, Destroy the Dwarves, is a winner. Next spring I’ll premiere a new song and in the summer it will be released as a digital single.

AC: Fucking tasty! I’ll certainly be looking forward to it. Is there anything else you care to shamelessly promote? Some big shows coming up, perhaps?

ORC: I only have two shows lined up right now, which may be my last of the year. October 19th I’ll be at the Elks Lodge in Keene, NH. It’s a benefit show to help with someone’s medical bills. October 25th I’ll be at JJ’s Tavern in Florence, MA. I have a longer set time for both of these shows; New Hampshire is an hour and Massachusetts I’m headlining, so it might be over an hour. I also have a music video in the works.

AC: Regrettably, my duties yearn for my attention, and you have another war to wage. Let’s carve pipes out of some dwarven bones sometime soon, it’d be an honor to turn on my brethren and fight for the orcish cause as a betrayer of humankind!

ORC: Thanks for having me and keep orc rock alive! 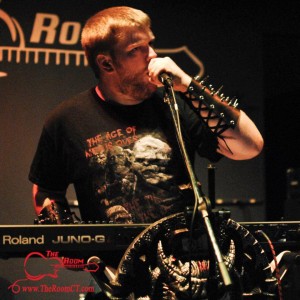 [AUTHOR’S NOTE: Orc Adams was very reasonably under the impression that this wouldn’t be published in time to promote this weekend’s shows, and Alternative Control already has them on our weekly local band show listing, but just so you know… these are going on THIS WEEKEND!]

Check out ORCumentary on facebook and listen to songs! About orcs killing goblins!