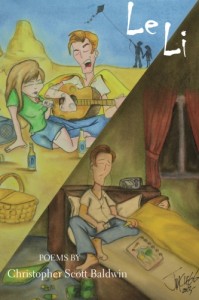 So, how the hell do I promote a book that I wrote without sounding like a douche? By saying as little about it as possible and allowing our fine (and probably incredibly handsome) Alternative Control readers make up their own minds on whether this stuff connects with them or not. I’ll provide this short introduction to give you all a feel for what I attempted to do with this book, and then unleash a few examples. Here we go!

Le Li is a collection of rhyme poetry and a work of psychedelic lyricism. The book acts as a journey and a cycle through a 24 hour period in American suburbia. The poems are divided into two chapters that represent day and night entitled Lemonade Sun and Limeade Moon. From here, you can probably guess that the predominant visual elements of these poems are in fact, lemons and limes. Using these two simple pieces of imagery, I set the book’s structure as a stringent representation of symmetry and contradiction. Basically, every poem in the first chapter has a corresponding sister poem in the second chapter that complements structurally, but expresses an opposing idea or emotional base. Because of the complexity of this arrangement, and rhyming’s limitations on poetic freedom, I was sometimes forced to make very unorthodox phrases and wild metaphors in attempt to express what I wanted. Because of this, the book has a naturally chaotic nature which supports the whole idea that this is supposed to be a psychedelic work, and the fact that poetic nonsense is a pretty important part of that literary world.

I wrote this book purely for self-satisfaction. I gave myself a challenge, and I’m proud that I was able to meet that challenge and complete what could be the most complex thing that I’ve attempted. After a few years of fine-tuning, a lot of headache medicine and pulled hair, Le Li is finally complete and I’m fucking relieved. If you like what you see in the few samples I’ve given, then please, grab a copy! You can get one from me personally, but they’re also available on Amazon.com (!!!).

Jim Clegg is responsible for all the artwork involved in this project, and he did a hell of a job. Make sure that you tell him how awesome he is either in person, or in the comment section below. Thank you!

Sun fell to the trees

Resting in the tops

Tired from the dive

Fires in the boughs

So the rains they then came down

Not from sky but from the roofs

Made of fire, acid, juice

To the skin they bred attack

Beaten to the bed

All we’ve built to prove

Strength and power’s will

Swept and cleared of spare

So the rapid flames wore crown

Trees and grass to sizzled brew

Mixed with yellow strokes our backs

Tears us down with cracking croon

Whips us bare and flame ridden

Tapping at the sun

Scratching for the red

With a spicy glaze

On the body’s bread

All the land is scorched

Along with the people spent

Color of a perished life

Taste of elder rot and strife

Sun has skewered the trees in half

On its steady downward path

Left the mirth of gardens bald

We chew but can’t break the peel

Teeth pushed into gums shall break

Blood vessels inside the mouth

So we can’t speak or then make

Throw them all in heaps

So the fires start

Fires burned throughout the woods

From the stones and bark they dance

Just how destructive it is

Yet we keep confined their space

Gathered round their sporting lines

Flames of green and grace

With a scarring piece

Though it burns with fierce

We endure and pierce

Our skin with green

Children of the flame

Eating of the scythe

In a festive swell of goods

Meat and drink in massive size

By the light of fire swarm

In an ancient step we prance

We are invincible race

Windows to the fleece

That in fire lies

Smoky lime smell of the flames

Colors us outside the lines

Of the skin we’re drawn

Fire and the melding of

Through the conquering endorsed