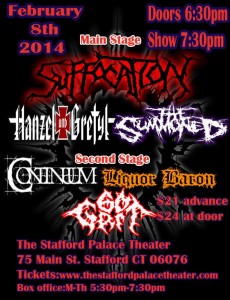 The Palace Theater in Stafford Springs played host to a highly anticipated metal show this past Saturday, where Long Island’s Kings of Death Metal, Suffocation, played headliner over a bunch of local and regional loud rock bands. The bands were split up onto two stages with the headliners Hanzel Und Gretyl and The Summoned playing the main stage, while local heroes 60 Grit, Liquor Baron and Continuum held down second stage duties in the venue’s massive balcony.

60 Grit opened the show with a set of brutal, groove orientated heavy metal, which proved why they are beloved veterans of the Connecticut metal scene. But nothing could prepare people for the chaos that would ensue during Liquor Baron’s set.

(But, before I continue, and in the spirit of full disclosure, I was once a member of Liquor Baron, but was let go because of “creative differences” and my way too busy work and writing schedules.)

Basically, this band plays angry, noisy and confrontational hardcore which is always on the cusp of falling apart at any minute. That’s part of the thrill of it. Lead singer Dennis Morin stalks the floor, gets right into people’s faces, and screams his angry tirades up close and personal, while guitarist Tom Nadeau runs at people while playing his instrument. So, it’s audience participation whether you like it or not. In fact, during the song “Viking Or Victim,” a person fell to the floor and Nadeau made kicking motions at him. You either get down with it or get out of their way.

One minor quibble, the crowd could have been more lively during the originals, which contain just as much violent energy and aggression as the Gang Green and Circle Jerks covers they worked into the set.

After the rubble cleared, one of Connecticut’s best metal bands, Continuum, took to the stage.

Vocalist Brenda St. Amant radiated charisma, and backed up that charm with an intense vocal performance, while the rest of the band met her intensity note for note. They opened with a high energy rendition of “Chokehold” and proceeded to lay down the metal on songs such as “Rise And Fall” and “Apathtic,” which went out to the ladies in the crowd. It was a powerful display from a band in their prime.

At one point, St. Amant said the band would start playing jazz to diversify their sound. This was said jokingly, but once the first main stage band starting playing, you could see that jazz has already infiltrated the loud rock world in many ways.  Boston’s The Summoned played mathy and growly death metal influenced loud rock, that was high on technical ability and raw power. At times, the band played in odd time signatures, which reminded this reviewer of some of the more techy metal bands out there. They were the perfect opener for the main stage and put everyone in a great mood.

But that great mood ended once industrial-metal duo Hanzel Und Gretyl started playing. To these ears, this band sounds like they would have been better suited to a goth or industrial night, not a night of death metal and hardcore, and they got a horrible reaction from the crowd. Though it didn’t win me over, I’m more concerned whether their Fascist-sloganeering is tongue-in-cheek or done for real. Sometimes, it’s hard to tell with these types of bands. But they did have their fans in the audience.

(I also found out that hopefully-faux-Nazi-loving bands like PBR. Who would have thought?)

After a brief break, Long Island’s OGs of death metal took to the stage to enthusiastic applause, and proved why they are one of the best at their trade.  Lead singer Frank Mullen, declared “We’re here to fuck your ear pussies” and that’s what they did for the duration of their set which contained a smattering of old classics mixed with newer, just as deadly, material.

Mullen, who was recently named one of the Top Modern Metal Frontmen, by Metalsucks. net, was in fine form, delivering a brutal performance that showcased his many different takes on the death growl. He’s the Pavarotti of the death grunt. He also does this awesome hand twitching thing when he really gets into it.

Plus, he was on fire on the mic between songs, giving the crowd his take on medical marijuana, why drinking beats all other types of hell raising at this point in his life, and why he can’t write romantic songs — because they turn out all wrong as was the case with the song “Entrails Of You”, which they tore through with aplomb. Guitarist Terrance Hobbs did have some slight technical difficulties during the set, but instead of whining about it, they just played through it, like true old-school veterans. You see, Mullen commented that they just get up there and tear it up regardless of the equipment or the type of place they play. That attitude is sometimes lost on the newer guard.

So they capped off a really awesome night of loud rock in a venue that has the potential to be another cool place to see shows.