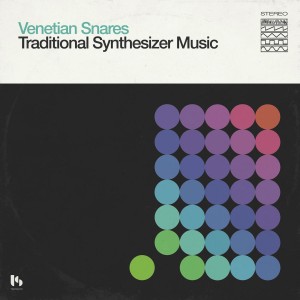 Aaron Funk (a.k.a Venetian Snares) has been quite the prolific electronic musician. He’s released a multitude of albums in the past decade and shows no signs of slowing down. Most of his releases fall within the margins of breakcore – a strange, loud, controversial and somewhat small faction of electronic music in which he’s an important figurehead. Yet he’s also dabbled in ambient, noise and modern classical music. With his newest release Traditional Synthesizer Music, he’s stretched his musical boundaries once again.

Much of this album isn’t too far removed from compositions by IDM groups such as Aphex Twin and Squarepusher. Traditional Synthesizer Music is an apt title for twelve tracks that dabble light-heartedly in the world of modular synthesizer sound. Percussion on these tracks, while chaotic at times, bubble and pop with a kind of playful innocence (at least to Venetian Snares standards). The tone is bright, equally aquatic and spacey, with bouncy synthesizer notes bleeping and splashing about in a carefree dreaminess. Despite the relative simplistic nature of the music, each track has its degree of unexpectedness. Rhythms and melodies for the most part are content to tinker about but occasionally veer off into moments of quirky acrobatics. But the music never turns to chaos. In fact, this is one of the easiest Funk albums I’ve ever listened to. Its prettiness and child-like futuristic nature is quite gratifying.

There’s an attentive composition at work here, and a surprising amount of variance considering the fact that this is essentially a synthesizer workout. Most of this is due to a complex emotional base. Each song has a distinct mood. “Goose and Gary V2” is wistful and ethereal. “You and Shayna V1” is anxious and a bit aggressive. “Decembers” is proud, slightly dangerous and triumphant. It kind of reminds me of music that could potentially be used to introduce Dr. Robotnik in Sonic the Hedgehog videogames. And then there’s a track like “She Married a Chess Computer in the End,” which takes on a more schizophrenic personality type that divulges a dose of dissonant apathy and a cutesy sort of mania.

This may not be a groundbreaking album, but Aaron has proven that he doesn’t have to resort to noise, dizzying tempos and industrial percussion to impress. He’s concocted a wonderful tribute to the synthesizer’s musical possibilities. It’s an instrument I’ve always been a sucker for and he presents it here stylishly and beautifully. I’m eager for a sequel, perhaps a Traditional Synthesizer Music V2?