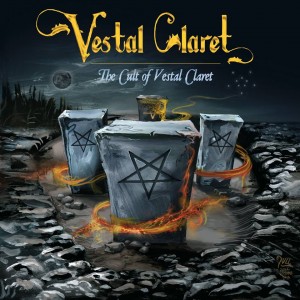 Let’s get right into things, here. What a pleasure it was the listen to Vestal Claret’s upcoming sophomore LP, The Cult of Vestal Claret. Every once in a while I come across a real gem of the metal genre, and this one shines like a bloody diamond. Is it Black Sabbath? Is it Dio? Is it Candlemass? It’s a little of all that and much more.

Members Simon Tuozzoli (Monster Eats Pilot, King of Salem, Murder Castle) and Philip Swanson (ex-Nightbitch, Hour of 13) have put together a testament to the black arts in all of its light and shade. On the lighter side, this music serenades you with its melancholic guitar leads and spacey Planet Caravan-type cemetery gloom. On the shadier side, these songs scream warning of a Biblical seven year war between God and Satan. It’s a war that already seems decided in Satan’s favor. He’s packing a strong heavy metal arsenal with the likes of Vestal Claret. The album presents itself as a malevolent showcase – from ghoulish dirges to outright dangerous anthems. Everything is blanketed in an atmosphere sometimes like Halloween, at other times like serious black magic, and all this without having to make their sound extreme. And can I make a special mention of the bass? Simon sure has some tricks up his sleeve when it comes to writing an independent, serpentine bass line. And the audibleness of the bass is NEVER a complaint.

There’s something incredibly nostalgic about what this band is doing. They take their songwriting approach out of the golden book of the NWOBHM. For example, the band values the importance of recognizing when they have a great riff, and that the best approach with this music is to drive that fucking riff into your head until you succumb to its power. There’s no need to overcomplicate things either. Sometimes pounding marches and harmonic minors do the trick, such as in the song “The Cult of Vestal Claret.” The verses command evil obedience and the choruses reaffirm certainty of the listener’s doom. And judging by that huge smile on my face when I listen to this album, you could tell I never knew my demise would be so gratifying.

Their straightforward sort of lyricism reminds me of classic storytelling, like some creepy, decrepit old man reliving his life in the occult with his grandchildren sitting upon his knee, listening to him recall all of his satanic practices. I’m totally into Philip Swanson’s vocal delivery here. In songs like “Great Goat God,” I’m imagining being invited to a haunted mansion by Vincent Price. He coaxes me into taking a glass of wine and we absorb ourselves in the cold beauty of necrophilia and the macabre. There’s a classical metal menace in his diction and he knows his way around a melody. There are no ball-gripping power metal moments, and I don’t think this music requires any. It would take away from the wickedness of this recording.

I have to mention their cover of Sabbath’s “Who Are You.” I don’t think I ever heard a cover of this song, and it’s about time. The use of guitar on top of the main synth melody really helps to beef up the strangeness of this tune. Now it’s not only stoned and lost in space, but it’s sharing a spaceship with an unwelcome guest. Lucifer, perhaps? Or maybe Yama…

To sum it up, Vestal Claret is hell as you imagined it when you were young. It’s all arrow-tailed demons, fire pits, a melting sky of blackness and heavy metal parties that go on for eternity. It’s a dark, loud and tough kind of lifestyle, but this band shows us how to deal with afterlife in the underground. Get your how-to guide from the band on May the 6th!