I’m here to talk a little bit about jazz music. And why the hell should I be talking about jazz music? I’m not a musician, nor have I received any kind of professional musical training. Sure, I’ve kicked around a few bands as a vocalist and lyricist, but give me a toy piano and I’d be damned if I could come up with a single fucking jingle. This genre has long been associated with the musically experienced, and though I’m prideful about being an avid music listener, I don’t have nearly the knowledge to wrap my head around what the hell jazz is really about, at least on an academic level. Why should I even be writing about it? I can’t give any insight into what these musicians are doing, so can I really give any constructive critique? No. But maybe, just maybe jazz encompasses more than just pretentious noodling and excessive showmanship. Maybe it’s more than just a mathematical formula to dissect. Perhaps there’s a way for non-musicians to enjoy this genre, much like I have. And that is the reason for this rant.

Just like heavy metal, indie rock and electronic music, jazz is an expansive genre with a whole lot of superficial filler. There are so many artists and works that could fall into one heaping pile of unnecessary overkill. I mean, in how many different ways can you play a fucking trumpet or a saxophone before things start getting monotonous and stupid? And at first listen, all these records are playing the same thing. A melodic motif will play for a few measures before each of the soloists start branching off into seemingly unconstructive stampeding notes, to hopefully join up again in repetition of the introductory motif for closure. That’s pretty much the formula. (Again, this is coming from a simple listener’s perspective, so the more musically knowledgeable can spare me their overbearing lectures about theory.) So, given the stringency of this formula, there isn’t much to differentiate between elevator music and the ingredients for what I’d like to call, “spiritual jazz”. And why have I made up a subgenre? Because these are the records that although stylistically similar to emotionless wankery, contain something a lot deeper to be experienced within those glistening brass instruments.

I’d like to use a musical example with John Coltrane’s piece, “Psalm” off of A Love Supreme. I’m listening to the track as I write this. Immediately, there’s a sense of being in the presence of something ethereal and only emotionally understood. The way that the timpanist rolls his mallets alludes to the pulling back of theater curtains, and then the drums cascade in stern blasts of distant thunder. A soft, amorphous piano line is a starlit backdrop. And front and center stage is the saxophone, moaning on in some kind of conjuring chant. Together, the instruments work towards a very spiritual mission. In my ears, they concoct a rough sketch of God’s voice as I always imagined it to be – incomprehensible, commanding and intellectually sedating. This reverie isn’t a result of musical analysis; this is what bleeds naturally through the speakers. When I hear this music, I don’t care about what it’s trying to say, where it’s going or how it’s affecting me. The music simply is and I melt into it. And when it’s over, I’m not in the same mental state that I was in when it began. Somehow, I feel calmer, freer, inspired and maybe even a little enlightened. This feeling is what separates bullshit jazz from jazz as a spiritual exploration. And it’s because of this connection that I feel jazz doesn’t need to be a musician’s genre. It can be enjoyed by pretty much anybody that calls themselves a music fan.

Of course, the whole reason I wrote this article was to try and share the love. Getting into jazz is obviously a huge undertaking. There’s a dizzying amount of subgenres. I’ve listened to free jazz, cool jazz, jazz fusion, acid jazz, avant-jazz, hard bop, bebop and jazz orchestras. There’s a lot of bleed-over between them all and they all have great things to offer. But believe me, I haven’t even managed to scratch the surface as far as really delving into this music. So my recommendations are going to be safe and obvious. Who to start with? It might sound pedestrian and cliché, but Miles Davis, John Coltrane and Charles Mingus make terrific gateway drugs. You can’t go wrong with almost anything that they’ve released or been involved in. Their music is tastefully wild, adventurous, experimental, and most importantly, spiritual. The appreciation might not come right away, since jazz is pretty fucking challenging for a novice listener. But if you got the mind for progressive music, stick with it and these artists will yield rewards. Here’s a little list of albums you can start with to get the ball rolling: 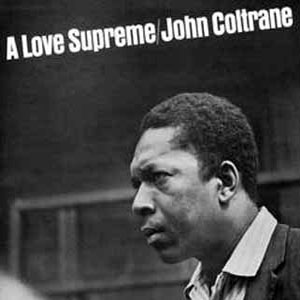 Yeah, this one is obvious. This is probably one of the most well-known jazz releases. But hell, it’s also one of the finest and it’s a great starting point. Coltrane wrote this album as an ode to God, and it could very well be one of the most soulful recordings I’ve ever heard. It’s relatively easy to digest and makes for great active listening, as well as fitting romantic background music. The sound is lush, ethereal and yet as carnal as a mythological beast.

Miles Davis – Miles in the Sky

As Far as Davis’ recordings, this would be a great place to begin. It isn’t as soft and approachable as something like Kind of Blue, but it isn’t the apocalyptic fires of Bitches Brew either. It sort of plays the middle ground between the two. The record is a mirror of the late 60s psychedelic movement with its bombastic composition and playful nature. The drums are particularly killer, loud and lively on this record, giving the music a bouncy quality.

Charles Mingus – The Black Saint and the Sinner Lady

This is one of my favorite jazz albums, by far. I love it for its sleazy and dirty heaviness. It’s like the music heaves itself clumsily forward like a drunk whore on a dance floor, and the orchestra sways along with an after-hours-in-Sin-City sort of raunchiness. And despite all this, the album manages to be reserved in its composition. Themes are often repeated, and there’s a definite sense of structure throughout. For those who are little wary of constant soloing, this might be for you.

So this album is actually more like a fusion of jazz, surf rock and lounge music. But Zorn is a renowned saxophonist and composer, and there’s enough jazz here to make the list. On the surface this is very easy listening. The tracks are light-hearted, fun, catchy and even resemble instrumental pop songs to a certain degree. But deep beneath and hidden in these compositions is a wicked sort of nature. I get a creepy sensation when I listen to this album sometimes, as if something is just behind me and ready to pounce. Try this out if you’re a little cautious about approaching the genre, since this music crosses over stylistically.

This is NOT for the faint of heart and gives a general idea of just how far jazz music can go. Many will be hesitant to even call this music, and it verges on being a complete cacophony. This jazz album manages to put any metal album’s attempt on being extreme to shame. Rapid fire rhythms and squealing horns and what-the-fuckida can be found here. This is only for the most adventurous kind of listener. Even I have trouble listening to it sometimes.