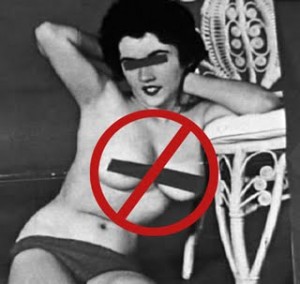 A recent episode of Ink Master featured breast cancer survivors getting tattoos to cover their scars and to help them feel feminine again. Fantastic, I’m all for it. But I found it odd that we could see breasts on television. Was it because their nipples had been removed? Does that make it okay to show a boob on TV?

Don’t get me wrong, I love boobs and I think we should be able to see them everywhere we go. But, by showing boobs without nipples and blurring out boobs with nipples (as we all have seen on TV), the censors are sending the message that female nipples are objectionable.

Let me get this straight. The thing that has fed human babies since the dawn of time is offensive? Even if your mother didn’t breast feed you, you can be damn sure the majority of your female ancestors fed your other ancestors with their nipples.

Male nipples, as we all know, are not the least bit objectionable. They only chronicle a time in the womb when those males were still androgynous/hermaphroditic. And American males would never be ashamed of their period of androgyny, no matter where it landed in their history.

Let’s start with the obvious excuse – “Men couldn’t control themselves if they saw women’s nipples.” As luck would have it, men can and do control their urges every day in every city and town across America. Yes, there are men who don’t control their urges. But women are tired of being told they dressed too sexy to avoid being raped. That’s called victim blaming and it’s a no-no. Google “Slut Walk” and learn. Bottom line it’s the man who is not controlling his urges who is 100% in the wrong. Mammas don’t let your babies grow up to be rapists.

And another thing, don’t assume all breasts are nice to look at. They are not. I’m pretty sure the majority of breasts won’t give anyone a hankering for titty-fucking. Most boobs will make you want tic-tacs, or egg yolks, or Ziplock bags filled with runny mashed potatoes. For every perfectly curved breast there are countless stretch marks, oddly shaped moles, zits, errant hairs and wrinkles. And don’t forget gravity. Standing up a pair of breasts may look divine, but lie down in the sand and they flatten out and disappear under arms and into arm pits.

Now, just for fun, let’s think of things you can see on TV. Violence of all types; beatings, shootings, stabbings, things blowing up, high speed car wrecks. Also simulated sex, underwear commercials and cereal commercials with scantily clad stick people, animals being killed, skinned and dressed. On the news, during the Rwanda genocide, I saw a man triumphantly showing off a breast he had cut off a woman. I will never forget that. It is forever burned into my brain. Thankfully the guy was holding it nipple side down; otherwise the censors might have found the sight of a cut off boob inappropriate.

What is it about that small circular grouping of slightly darker skin cells and a pencil eraser? Why do television viewers need to be sheltered from the sight of it? Perhaps it is the knowledge that female nipples gave us all life, and the amount of power and purpose that gives women is earth-shattering-scary to censors with small members, who question their own worth on a daily basis. I mean, who needs censors? By covering that which makes us slightly superior they are stripping us of our inherent value. And that shit ain’t right, yo.