A reader posed an interesting question to Alternative Control last week: what should the role of successful, established bands be in guiding younger bands that are coming onto the scene?  And honestly, I didn’t know how to answer.  First, what makes a band “successful” or “established”?  Success for my own bands means that our friends come to the bar to see us, and possibly we self-fund a decent recording – fine for a weekend-warrior like me, but maybe a low bar for someone else.  And as far as “guiding younger bands,” it seems like every time I try to give people the benefit of the doubt, I just get fucked over.  To get deeper into this subject, I reached out to members of bands in the local Connecticut metal scene that are undoubtedly established in terms of longevity, notoriety, and draw: Shawn Cavanaugh (Kali Ma, Cyperna), Opus (Dead by Wednesday, Alcoholica, Earth, Bullet Boys), and James Stolfi (Eyes of the Dead, Lyra, Burn the Bodies).

All three talked about the importance of networking and work ethic for any band, especially those hoping to expand their reach beyond hometown watering holes.

“Being in a band is an extension of your family and you’re going to add to that family with your fans and other bands you will befriend along your musical journey,” Shawn said. “It’s better to have camaraderie amongst bands than negative energy. […] It just boils down to teamwork. Your band is a team, but when you join forces with other teams, you become an army — and an army is much more unstoppable.”

But if you wanna join the army, you have to actually show up.  As James put it, “It starts with the obvious: help is what is deserved.  People need to go out and take the initiative to do things on their own – they cannot have the expectation that bands that are established are supposed to be doing things for them.  You have to earn your way and get to any of these things just like anybody else.  […]  You have to be a member of the scene whether or not your band is playing.  […] It’s more than just inviting people to an event on Facebook.  All of that networking comes from a physical presence.”

In terms of how they could tangibly help a younger or newer band, the guys also talked about sharing contacts.  Shawn said, “Regardless of what genre you play and how good you are, you are going to come across a lot of dead ends and already-established bands that may not be so enthusiastic to show you some love. As an established band, you always have to remember that starting off can be difficult. I firmly believe that you need to help out the younger bands because when you’re first starting off, it’s quite difficult to know who to talk to about booking shows, what venues are good to play at, and what you should and should not be doing in order to guide your band down the right path of success.”

These interviews took place separately, but Opus seemed to be in agreement.  He said, “You don’t have to copy your whole notebook for them, but if a guy is like, ‘I’m trying to book a show here, who do I talk to?’ tell him who to talk to.  Or if a band from South Carolina gets in touch with me because they’re coming through Connecticut and want to know where to play, I’ll tell them about a couple different venues.  They still have to call (the venues) and do the legwork to promote, but I’m happy to point them in the right direction. […]  Make them work for it, but at the same time, don’t be a dick.”

Who in our scene is doing it right, established or otherwise?  James cited Xenosis and Lightsbane — “People know who they are because you’ll see them… whether they’re playing or not.”  He also mentioned Opus – remember, these interviews took place separately – saying, “Everybody knows who he is because he’s at all kinds of stuff, y’know?  That guy busts his ass.”  The ass-buster himself is a fan of Maniac, a young thrash band that he thinks “has a lot of potential.”

So, what’s the verdict?  There was a lot more to these conversations than what’s in this article, but the main idea from all three guys is that for a band so be successful, they need to show up.  The bands that are established in our local scene have backed their music with, as James put it, “a physical presence.”  Younger or newer bands need to take that to heart – and if they do, they’ll find that more experienced bands are willing to partner with them to book great shows. 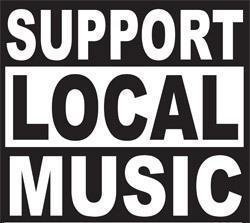 A cynic might ask, then, is the local scene just a big blow-job fest?  I’ll pretend to like your band if you pretend to like my band?  I would disagree.  First of all, real support and fake support look nothing alike —  for all the talk about “respect” and “the scene” and blah-fucking-blah, you’re only sitting at the bar til one-thirty in the morning if you actually like the music (or the people playing it).   If you really want to join the army, you’re playing the shows you booked.  You’re going to see local bands you enjoy.   You’re not fucking off everyone else and then complaining on Facebook that your band is going nowhere.   Not every local band gets big, but every national band had to start with a dedicated local fan base that they built through mutual support and caring.  Even to get “medium” and do things like sell tickets to open for huge acts or to crowd-fund money for a tour, you need people who care about you enough to give you their hard-earned cash.  And why would they care about your band if you’re a hermit or an egotistical jerk?  Sorry, I’d rather spend my money on used bluegrass CDs at the library bookshop…. Near the end of his interview, James said, “It’s about proving that you give a shit – and if you wanna give a shit, then that door’s wide open.”

Want to hear what Connecticut metal has to offer?  Check out compilations from Connecticut Metal Alliance, Alternative Control, Ear One Productions, and Skumbagh Productions.  And if you give a shit, go to a fucking show!