Have you been feeling like a slave to the grind lately?  Does your credit card statement bleep you with a sharp kitchen utensil every month?  This is an awkward subject, but maybe it’s time for “Moneytalks.”

I’m not some kind of certified “money expert” and I’m by no means financially independent. I’m just a regular working (wo)man like the rest of you, trying to claim my slice of the American Dream.  Over the years, personal finance has been a topic of interest to me, as well as inequities in the American economy.  Join me on my imperfect journey, where I kick myself for getting stupid traffic tickets and attempt to balance my desire to drink fancy beer with my goal to retire early.  Ha!

In this first column, we’ll examine The Basics. The ideas that follow may not be news to you, but they’re essential groundwork for everything else that’s coming in future columns.

Step Negative Six-Six-Six of the Jessie May School of Finance is to have your own money.  Do not remain in a situation where you are financially dependent on a partner.  Three generations of matriarchs in my family have given me the solid advice that “a woman needs her own money” — and in 2019, it’s safe to say this applies to all genders.  Maintain your own income sources, your own bank account, and your own credit card.  Not all things will be equal in the finances of your relationship and your money doesn’t need to be completely separate from your partner’s, but you want to be able to stand on your own if a situation changes.  If you’re not able to work a full-time job outside the home, we’ll talk about side hustles and passive income in future columns.

Following Step Negative Six-Six-Six, let’s move onto Step Negative Turned-Up-to-Eleven: have an emergency fund that will cover at least one month of your essential expenses.  Not just rent/mortgage, but also utilities, food, insurance, gas for your car…  Everything that you can’t avoid spending money on for a month.  Ideally you’ll build your emergency fund up to 3-6 months of expenses (or more), but one month is the bare minimum.  If you don’t currently have one month of dough socked away somewhere, this is an emergency.  It’s also your short term goal — more on that later in this column.

Now that we’ve got those non-negotiables out of the way, Step One is to figure out where you stand in terms of income and expenses.

Step One and a Half is to figure out what you’re spending on everything else.  For one month, save all receipts for anything you purchase.  Include food and gas receipts so you can see if your estimate from Step One was on track.  Some people might like an app to help them do this; I preferred the old-fashioned “receipts in an envelope” method.  Do what works for you.  Also, don’t forget to include online purchases!  At the end of the month, tally up what you spent.  Did you stay under the difference between income and expenses?  Or did you put yourself further in the red?

Now that you have an idea of your income, expenses, and spending, it’s time for Step Two: brainstorm goals.  You should have a short-term/immediate goal that can be accomplished in one to six months, a medium goal that you want to reach in the next year or two, and a long term goal that lives in THE FUTURE.

What should your goals be?  If you don’t have the one-month emergency fund we talked about earlier, that’s your immediate goal.  Before you say, “Jessie, there’s no way I can save any money,” look back at the expenses and spending you tracked.  Do you have cable?  Did you buy beer?  Did you go out to a restaurant or a show?  If so, you have money that could be allocated for saving.  You don’t have to stop having fun forever — just until there’s a month’s worth of expenses in the bank.  Perhaps even pay the bare minimum on credit cards until your emergency fund is built up — the logic is that this fund will save you from using the credit cards in the future.

(If you don’t have an emergency fund and you truly did not spend on non-essentials, we’ll talk about that in a future column.)

How about medium and long-term goals?  That depends on YOU. Maybe you want to take an amazing trip; maybe you want to get rid of a pesky credit card bill.  I can’t tell internet strangers what they should want to do, but I can share what I’m working towards.  My medium goal is to buy another car.  The Corolla of Doom has 160K miles on it and cosmetic damage that makes it look like a beater; the car is beautiful on the inside, but not worth spending on a major repair.  My long term goal is to retire when I’m 58 or 60.  I started teaching when I was 23, so if I stay in this profession, I’ll max out my possible pension benefits by the time I’m 60.  Of course, this long term goal might change if I switch careers or have children — I might be paying for Jessie May Jr.’s college right around then…. 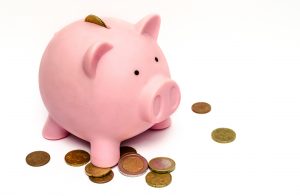 Anyhow, once you’ve brainstormed your goals, you’re ready for Step Three: create a budget that aligns with your goals.  How much will it cost to attend Wacken next year?  How much should you stash each month to pay for it?  Does that mean buying less beers at local metal shows right now?  Maybe.  YOU know what you want to do.  Your budget will help you get there.

Here is a summary of The Basics:

You may be thinking, “Okay, I have these cool goals now, but there’s not too much extra money in my budget.  How the hell am I supposed to go to Wacken next year, Jessie?”  Never fear!  The next two installments of “Money Hacks for Metalheads and Old Millennials” will address how to create room in your budget by spending less and making more.

PS: Aside from being common sense and fourth grade math, a lot of my advice in this column can be found in much greater detail here: Smart Couples Finish Rich: 9 Steps to Creating a Rich Future for You and Your Partner

(That’s an Amazon Affiliate link to purchase the book, but get a head start on the Spending Less column by borrowing it from your local library instead!)